We need public policies that promote time for parents and caregivers to care for and bond with their infants and toddlers, without jeopardizing the ability to pay for basic necessities.

In the first months and years of life, young children discover the world through experiences with their parents and other caregivers. A young child’s early relationships, especially with parents, shape the architecture of the developing brain. These relationships require care, consistency, and, above all, time. 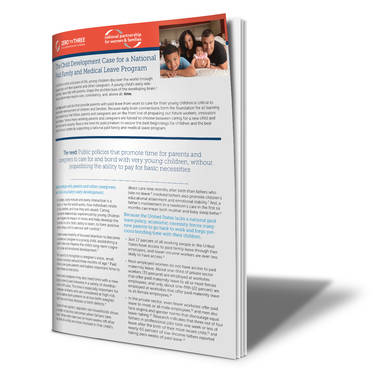 Enacting public policies that provide parents with paid leave from work to care for their young children is critical to the healthy development of children and families. Because early brain connections form the foundation for all learning and relationships that follow, parents and caregivers are on the front line of preparing our future workers, innovators and citizens. Yet too many working parents and caregivers are forced to choose between caring for a new child and their economic security. Now is the time for policymakers to secure the best beginnings for children and the best future for our country by supporting a national paid family and medical leave program.

The Need: Public policies that promote time for parents and caregivers to care for and bond with very young children, without jeopardizing the ability to pay for basic necessities

Relationships with parents and other caregivers are critical to a baby’s early development.

Because the United States lacks a national paid leave policy, economic necessity forces many new parents to go back to work and forgo precious bonding time with their children.

Too often, out of economic necessity, new parents are forced to go back to work and forego precious bonding time with their children.

The solution: A national paid family and medical leave program

The benefits of paid leave for babies, their families, and the nation

Paid leave – at a child’s birth or adoption and as they grow – improves outcomes for the entire family, including parents and caregivers.

Paid leave policies can benefit employers, taxpayers and the economy, now and in the future.