Home/Resources/When is the brain fully developed? In some ways, never. Our brains are continually re-shaping themselves to meet the demands of everyday life, even throughout adulthood.

However, there are certain aspects of brain structure and function that do level off during development. For example, the number of neurons peaks even before birth; some 100 billion are formed during just the first 5 months of gestation. (Recent evidence suggests that new neurons are produced throughout life, though far less rapidly, and probably in numbers sufficient only to replace those that gradually die off.)

In spite of the great number of neurons present at birth, brain size itself increases more gradually. This growth is largely due to changes in individual neurons, which are structured much like trees. Thus, each brain cell begins as a tiny sapling and only gradually sprouts its hundreds of long, branching dendrites. Brain growth (measured as either weight or volume) is largely due to the growth of these dendrites, which serve as the receiving point for synaptic input from other neurons.

Another way of measuring brain development is to look at the speed of neural processing. A newborn’s brain works considerably more slowly than an adult’s, transmitting information some sixteen times less efficiently. The speed of neural processing increases dramatically during infancy and childhood, reaching its maximum at about age 15. Most of this increase is due to the gradual myelination of nerve cell axons (the long “wires” that connect one neuron to another neuron’s dendrites.) Myelin is a very dense, fatty substance that insulates axons much like the plastic sheath on a power cable, increasing the speed of electrical transmission and preventing cross-talk between adjacent nerve fibers. Myelination (the coating or covering of axons with myelin) begins around birth and is most rapid in the first 2 years but continues perhaps as late as 30 years of age.

Synaptic development is a more complicated issue. Synapses are the connecting points between the axon of one neuron and the dendrite of another. While information travels down the length of a single neuron as an electrical signal, it is transmitted across the synapse through the release of tiny packets of chemicals or, neurotransmitters. On the receiving (post-synaptic) side, special receptors for neurotransmitters change the chemical signal into an electrical signal, repeating the process in this next neuron in the chain. The number of synapses in the cerebral cortex peaks within the first few years of life, but then declines by about one third between early childhood and adolescence. 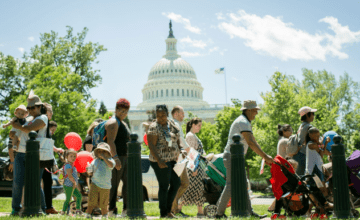 Fight for Our Families: An Infant-Toddler Agenda for the President and the 118th Congress