Genes and environment interact at every step of brain development, but they play very different roles. 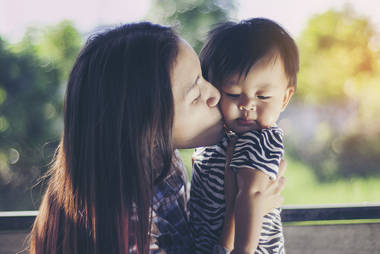 Generally speaking, genes are responsible for the basic wiring plan—for forming all of the cells (neurons) and general connections between different brain regions–while experience is responsible for fine-tuning those connections, helping each child adapt to the particular environment (geographical, cultural, family, school, peer-group) to which he belongs. An analogy that is often used is wiring a phone network: genes would specify the number of phones and the major trunk lines that connect one relay station to the next. Experience would specify the finer branches of this network—the connections between the relay station and each person’s home or office.

For example, each of us is born with the potential to learn language. Our brains are programmed to recognize human speech, to discriminate subtle differences between individual speech sounds, to put words and meaning together, and to pick up the grammatical rules for ordering words in sentences. However, the particular language each child masters, the size of his vocabulary, and the exact dialect and accent with which he speaks are determined by the social environment in which he is raised–that is, the thousands of hours he has spent (beginning even before birth) listening and speaking to others. Genetic potential is necessary, but DNA alone cannot teach a child to talk.