Why Moms Should Care about Child Care as an Election Issue

Candidates for offices at all levels of government need to recognize that child care counts, and it can’t be financed solely by parents and the sacrifices of providers. 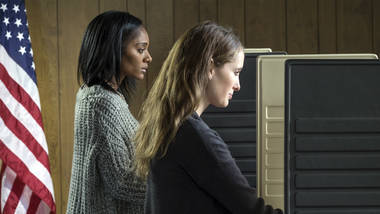 If you don’t tell them, candidates won’t know that child care is an issue on which people will base their votes. Visit www.rally4babies.org and let them hear from you throughout the campaign about why child care is an election day issue. (Credit: Burlingham / Shutterstock.com)

If you’re a mom with young kids, what may be on your mind on Election Day isn’t “who is better on economic policy?” but “how am I going to juggle child care so that I can find the time to vote?” But you need to hold that thought even after you’ve resolved the day’s child care challenges and headed into the voting booth. Because in reality the two questions are really the same. Child care fuels both our country’s economic engine and its future engineers—and its teachers, builders, thinkers– but parents and providers are the ones who shoulder the backbreaking burden of financing it.

Child care is unquestionably a pocketbook issue. You know the litany of facts. In 33 states, it costs more than college at a state university. Nationally, paying for infant care takes more than a third of a single mother’s paycheck, if an arrangement can even be found. Little help is available. Child care assistance for low-income families reaches only 1 of every 6 eligible children. In a largely parent-financed system, families can’t pay more, leaving the providers to subsidize - with low wages - the care that enables parents to contribute to the economy. Average child care wages are at the bottom of the occupational ladder at just over $10 an hour, although research shows better paid staff are associated with better quality care.

For candidates and elected officials, child care is often “just” a family issue, an afterthought.

Child care isn’t just a work-family issue. If parents are the line leaders in shaping their children’s development, child care staff are right behind them helping flip the switches of early brain connections. In the first three years, these connections form at the rate of over one million a second, laying the foundation for all learning that will follow. Future brain development will rise like a scaffold on this base, whether it be strong or fragile.

Quality in child care matters. The number of children each teacher cares for, the knowledge of how to facilitate babies’ individual learning agendas, all make a difference, but add to cost. Not surprisingly, given the lack of investment, much of infant-toddler care is poor to mediocre quality.

For candidates and elected officials, child care is often “just” a family issue, an afterthought or something parents and maybe employers should take care of. It may take a backseat to the “educational” issue of preK. In truth, it is a national economic issue and an educational one as well.

Babies brains don’t know what adults or politicians label the settings they are in. They just know if they get the back-and-forth interaction and opportunities to explore and experiment they need to thrive and develop into the workers who will carry the weight of our nation’s economy at mid-century. Economist James Heckman’s models show that optimal experiences before age three actually boost the return on investment for preK. You don’t have to be a Nobel laureate to realize that, with children whose families lack resources often falling behind before age two, giving them an early boost both at home and through quality child care could help prevent them from having to play catch-up in preK.

Investments in the early experiences of very young children can’t wait, because babies can’t wait. Candidates for offices at all levels of government need to recognize that child care counts, and it can’t be financed solely by parents and the sacrifices of providers. It needs a bold investment reflecting a public-private partnership at all levels of government. So look at what candidates are saying. Who is taking child care seriously as an economic prosperity issue? Who is talking about an investment big enough to make a difference? Who would provide support for a system that rewards providers while ensuring that families at all income levels have access to the high quality their children need?

But, if you don’t tell them, they won’t know that child care is an issue on which people will base their votes. Visit www.rally4babies.org and let them hear from you throughout the campaign. And when you enter the voting booth, keep child care at the top of your list.

Be a Big Voice for Little Kids this Election!

Join us in tweeting the presidential candidates about the issues that matter most to you.