Toddlers and Self-Control: A Survival Guide for Parents

Children don’t actually develop this kind of self-control until 3.5 to 4 years of age, and even then they still need a lot of help managing their emotions and impulses. You are the expert on your child. We have expertise in child development. We’re in this together. #ParentForward 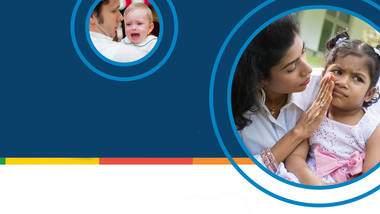 Picking up the remote after you’ve told your child not to touch it five times in 10 minutes. Slapping a friend who took the last train off the table at child care—right after she agreed with you that ‘hands are not for hitting.’ Running directly into the ocean after you’ve clearly explained that he can’t go in the water without an adult. These are typical toddler moments that all come down to one thing: self-control, and the lack of it.

Why do young children have so little self-control? The part of the brain responsible for exerting control over the emotional, impulsive part of the brain is not well-developed in children under 3. This is why toddlers are much more likely to act on their desires, such as yanking a toy out of a friend’s hand, rather than saying to themselves, “I really want that toy, but it’s not right to grab, so I am going to go find myself another toy.”

In fact, Tuning In, ZERO TO THREE’s national Parent Survey, found that parents’ expectations of their toddlers often outpace what toddlers are actually able to do when it comes to self-control. When parents were asked at what age children have the ability to resist doing something that parents have forbidden:

Children don’t actually develop this kind of self-control until 3.5 to 4 years of age, and even then they still need a lot of help managing their emotions and impulses.

Life with your little one will be (hopefully) much less maddening when your expectations for her are in line with her abilities. It can be a relief to know that your child is acting his age; that he needs help to learn to manage his impulses, and that he is not “misbehaving,” or purposefully trying to drive you crazy, as much as it feels that way. Here are some ideas for nurturing self-control:

1. Recognize that it’s not easy being a toddler.

There are an awful lot of things toddlers need to do that they don’t want to do, like getting in the car seat, stopping play to take a nap when they are NOT tired, or sharing their treasures. Let your child know you understand: “You are really disappointed that we can’t go to the playground today.” “You are mad that I won’t let you have ice cream before dinner. I totally get that.” “You are so frustrated with that train—it is so hard to make it stay on the track.” Giving your child the words to describe his feelings is the first step toward helping him manage his emotions and develop self-control.

Color one side of a paper plate red and the other green, and play some “stop and go” games. For example, when you are outside playing, your child runs toward you until you put up the red sign. Then she runs again when the sign is green. Play “freeze dance” with music. When the music is on, your child dances; when you stop it, she has to freeze. Read books about children who get angry or have tantrums, and talk about how to handle these big feelings. Use your child’s pretend play as an opportunity to teach self-control. When a stuffed animal gets really mad or does something it shouldn’t, problem-solve how ‘Mr. Bear’ might deal with the challenge he’s facing.

3. Make a plan for how to help your child cope with experiences that are especially hard for your child.

Some toddlers have a hard time with transitions, while others have a hard time at birthday parties or adjusting to large group experiences. Think about what situations tend to trigger challenging behavior from your child. Making small adjustments to family routines (like re-thinking taking your toddler to the toy store after a bad night’s sleep) can help to reduce challenging behaviors, with more ‘Yesses’ and fewer ‘Nos’.

Even though your child may not be able to follow a rule yet, it is still important to set expectations. The key is to take a teaching and guiding approach with clear and natural consequences. Stay calm and explain the rule (“No throwing toys. If you throw the truck, I will have to put it away for 5 minutes”). If your child tests the limit, which is to be expected, calmly implement the consequence. Through everyday interactions like these, children develop the brain connections they need to master the skill of self-control.

5. Take your own temperature.

As a parent, you have a lot of power. Your child is taking his cues from you when it comes to managing emotions. Learning to manage and make sense of your own feelings—and getting help when you need it (and we all do)—is the best way to help your child develop self-control. Responding thoughtfully, rather than reacting, is one important way that parents make the difference in how their young children are learning and growing.

Explore more from The Expectation Gap