As the year comes to a close, it’s time to celebrate our policy successes for infants and toddlers! Throughout 2016, ZERO TO THREE kept you updated on the latest developments in infant-toddler policy in Washington, D.C. and in states across the country. Here are our picks – in no particular order – for the best wins for babies in 2016: 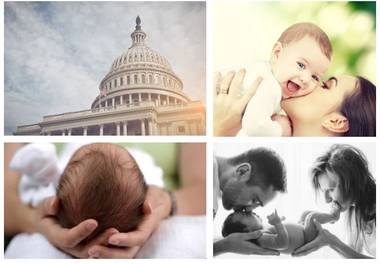 Win #10: 21st Century Cures legislation includes important mental health grants for very young children. Provisions recommended by ZERO TO THREE were part of the bill that was passed by Congress on December 7. These provisions will help support mental health promotion, intervention and treatment programs for infants and toddlers.

Win #7: The Administration for Children & Families tackled two big issues in 2016! It released new regulations for the Child Care and Development Block Grant and completed the first comprehensive update of the Head Start Program Performance Standards since 1975. Together, they infuse more of the science of early development into the guidelines and requirements for the two most important federal early care and learning programs.

Win #5: For the first time, both major candidates for President focused on issues critical to babies and families on the campaign trail. The inclusion of both child care and paid family leave in both campaign platforms is a sure sign that families’ needs are finally bubbling to the surface.

Win #4: States created or enhanced mandates for employers to provide workers with paid time off to care for themselves and family members or bond with new babies. New York State and San Francisco, California both passed paid family leave laws in the spring, and voters in Arizona and Washington approved paid sick leave initiatives in November.

Win #3: Congress increasingly recognized the needs of infants and toddlers in the child welfare system. The Commission to Eliminate Child Abuse and Neglect Fatalities released their final report, highlighting the need to focus more on the youngest children. The Family First Prevention Services Act made significant progress in a move to open up more funds to keep families together, passing the House and coming close to passing the Senate. ZERO TO THREE also released a blog series exploring the child welfare system for very young children and families.

Win #1: ZERO TO THREE launched the “Think Babies” Campaign to make the potential of every baby our national priority! With the support of the Robert Wood Johnson Foundation, the campaign will educate Congress and the Administration on what babies and families need to thrive–and the implications for the country. Join us! Together, we can help make sure all families have the resources and support they need to give their babies a strong start in life.