The Reality of the Budget for Babies

The Administration’s budget released a few weeks ago reminds me of how I justify time spent watching reality TV by analyzing the point of view behind the program. What is the social commentary we might take away? How does the program view the people involved — with empathy, contempt, derision?

Applying this frame, the budget’s view of American families — at least those who are at the lower end of the economic ladder — is bleak. It sees them as lacking dignity, dependent on government, averse to work, unworthy of public help. 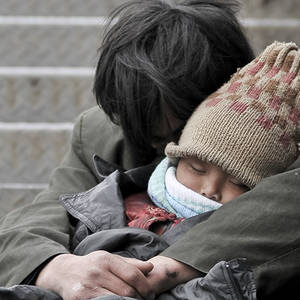 This view of low-income families illustrates the budget’s impact on babies, because babies don’t exist in a vacuum. They live in families, adding significantly to family expenses, and are deeply affected when their families are deemed undeserving. As advocates for babies and families, we cannot get distracted by the absence of significant cuts in early care and learning in the budget, or the parental leave proposal. Babies have a host of needs for healthy development, and this budget largely turns its back on them.

The truth is that we don’t have to guess at the point of view behind this budget: its explicit intent is to redefine compassion, away from ordinary working families and toward affluent taxpayers. The budget achieves this new focus by combining new tax cuts with those in the House health care bill that would cost our country as much as $6 trillion over ten years, while at the same time restructuring key entitlement programs and gouging domestic discretionary spending, draining $2.5 trillion from programs for low-income people over that period. Non-defense discretionary spending would be cut by $54 billion in FY 2018 alone and an astonishing $1.6 trillion over the next decade so that spending on the common good of the American people would be slashed by 41 percent. The end result would be to revoke or cut supports for the basic needs of the American people, such as health coverage and health care, nutrition, adequate shelter, and education.

This point of view promotes the idea that people using public programs are a relatively small group of individuals grown dependent on government assistance. In fact, these programs help millions of working families and individuals stretch their paychecks in an economy where many jobs don’t lift them above the poverty line. Most young children are not in the households that will reap the benefits of tax cuts. Almost half of infants and toddlers are in poor or near-poor families — that’s less than $50,000 a year for a family of four. About three-quarters are under 400% of poverty, or $96,000 for a family of four. Any way to stretch those dollars encourages work and helps support those children’s development.

While lawmakers on both sides of the aisle have rejected the overall Trump budget, that doesn’t mean they won’t embrace components of it as Congress makes major decisions in writing its own budget in the next few weeks. Proposals to restructure programs such as the Supplemental Nutrition Assistance Program (SNAP) and Medicaid have been a staple on Capitol Hill for years. Once their fundamental premise — that the federal government should ensure low-income Americans can meet their basic health and nutrition needs — is changed, there will be no way back.

Keeping these things in mind, how will the Administration’s budget affect the reality of babies and their families? Let’s look at the framework for what babies need to thrive.

Good Health: Quite simply, the budget lays siege to Medicaid and the Children’s Health Insurance Program (CHIP). Currently, more than 45 million young children are covered by these programs, largely accounting for the current astonishingly low level of uninsured in this age group — 3.2 percent. But the budget takes the $869 billion in Medicaid cuts in the American Health Care Act and doubles down, cutting even more for a total of $1.3 trillion over ten years. CHIP isn’t spared, restructured and targeted for $5.8 billion (about 21 percent) in cuts to the federal share, extending the program for only two years, shifting funding more to the states, and lowering the eligibility cap.

Strong Families: Families must be able to meet basic needs in order to nurture their children. The budget would take its toll on families’ ability to feed, shelter, and care for their babies, with lasting consequences.

Positive Early Learning Experiences: Head Start/Early Head Start and the Child Care and Development Block Grant are essentially level funded, but that is small solace. At current funding levels, these programs come nowhere close to meeting the need: child care reaches fewer than one in six eligible children and has shed over 350,000 children served in the past seven years. Early Head Start serves only about six percent of eligible babies and toddlers. Both programs must meet costly new requirements, so would need about a $2 billion increase just to stay in the same place.

Too much is at stake for the babies and families for whom these and other programs can mean the difference between a strong beginning and fragile start. With their brains forming a million new neural connections every second, babies need a new reality if they are all to reach their potential. The machinery for undermining basic supports for families who are nurturing our future workforce, already in play through the healthcare bills, will be built in the next few weeks as House and Senate write their budget instructions. We must pay attention to the big picture — radical changes to entitlement programs and decimated overall spending on domestic discretionary programs — and urge Congress to write a different script. They wouldn’t have to go far to find a better show for babies. Economist James Heckman has found that investing in high quality early care and learning for children from birth to age five yields a 13 percent return per annum. What would a well-known TV investor say to that? Buy, buy, buy!