In This Season of Giving, the Tax Bill Doesn’t Add Up for Babies

In the spirit of the season, we need to join together and demand that Congress cast its net to cover all children, regardless of their family’s income. 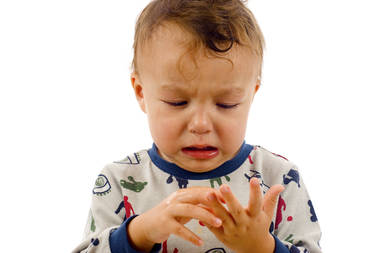 In this season of giving, when sharing with those less fortunate is widespread, the Congress is poised to pass a tax bill that could not embody this value any less. The full Senate will take up its tax bill this week, with a goal of reconciling it with the House bill (passed earlier in November) and passing a final version by Christmas. The two bills differ somewhat, but they both share a long-term shift in resources toward corporations and the wealthy. While the bills’ proponents describe them as middle-class tax relief, in reality, they would result in moderate-income and especially low-income families being hurt far more than they are helped. In short, for families with young children, the tax math just doesn’t add up and infant-toddler advocates must be ready to push back.

The Senate bill’s authors tout an average drop in federal taxes of about $1,200 per family. But looking behind this average, a family’s income would have to approach $90,000 before they could see such a savings, according to the Tax Policy Center. Families with infants and toddlers tend to be at the lower end of the income scale. The majority have incomes below $100,000, and 40 percent have incomes less than half that amount, placing about 5 million babies and toddlers in the bottom two-fifths of income nationally. Families at the bottom will see a little gain from the tax cuts in the near term—the lowest fifth would get an average of $50 tax relief in 2019. But they also won’t reap long-term benefits—ten years from now, they will be paying more in taxes, or at best breaking even. Moreover, many benefits that help stretch the family paycheck to meet basic needs could be jeopardized when the bill for this tax bill comes due.

The Senate bill would increase the number of uninsured by repealing the individual mandate in the Affordable Care Act (ACA). The ACA’s interlocking provisions work because everyone is in it together. Without the mandate to have coverage, healthier people likely will drop out, leaving those who really need insurance to pay higher premiums. An estimated 13 million would no longer have health insurance, creating billions in savings on health care subsidies that will be used to pay for tax cuts for corporations and the wealthy.

Moderate- and low-income families will see modest gains at best, and over time, will see their taxes rise. Many families with an income of $30,000 or less will see little benefit from the cuts and by 2025 will see taxes rise. While the effect on individual families depends on their particular circumstances, for many, the bill will not be enough to make a big difference for families with young children. Any savings they could potentially see could easily be swallowed up in child care costs (which this bill does nothing to alleviate) or simply keeping up with the rent or electric bill. The biggest catch for individual taxpayers is that their cuts are temporary, while the major decrease in corporate rates is permanent. The result? Ten years from now, about half of all taxpayers would pay more. The Congressional Joint Committee on Taxation finds that in 2027 families making under $75,000 will see their taxes rise. But according to the Tax Policy Center, the top 1 percent of taxpayers would continue to see tax decreases and reap 62 percent of the total benefit ten years out.

Massive deficit spending–$1.5 trillion over 10 years—is built into the bill, with immense consequences for low-income families. The vast majority of economists do not believe the tax bill will bring the huge gains in economic growth that its authors promise will pay for the tax cuts and raise incomes by multiple thousands of dollars. Deficit-cutting fever will inevitably return, and when it does, the families seeing the fewest benefits from the tax bill will be hit again as the supports that help them meet basic needs are targeted for budget cuts. The House and the President have already identified where they want to cut, including restructuring and cutting Medicaid and the Supplemental Nutrition Assistance Program (SNAP). Programs such as Early Head Start and child care, already stagnant over the past few years, will also likely be further squeezed. 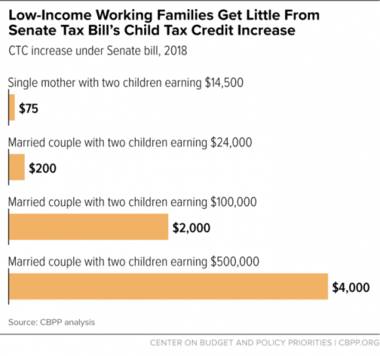 Increases to the Child Tax Credit give modest relief to low- and moderate-income families. Both the House and the Senate bills increase the existing Child Tax Credit, with the Senate increase slightly more generous. These increases are not fully refundable, so families at the low end of the income scale—those whose young children could benefit most from a few thousand dollars of extra income—will see only modest increases, $75 or less for many families. Moreover, this expansion would go away after 8 years—part of the price for making the corporate cuts permanent.

Tax-based child care support actually decreases. In the upside-down benefits of this bill, a win for working families with young children is the decision not to repeal the Child and Dependent Care Tax Credit (CDCTC). The CDCTC provides some relief to moderate-income families, and while the credit was not repealed, neither was it improved to increase its value or enable those without tax liability to benefit. The House bill would end the Dependent Care Assistance Program in 2023, a provision that enables moderate-income families to set up flex accounts that help pay a portion of child care expenses with pre-tax dollars.

This is the season where our thoughts turn to home and hearth, to festive events with friends to celebrate the holidays. But infant-toddler advocates are tired of pushing back against policy proposals that would undermine the resources families need to nurture their young children. We are weary of ceaseless attempts to roll back health insurance, cut domestic spending, and promote tax benefits that are unlikely to trickle down to working people instead of directly assuring them a living wage. It feels wrong when tax tables, not sugarplums, are dancing in our heads. Yet it is precisely this season that should remind us that sharing the fruits of a recovering economy with all Americans is the path to ensuring that our future economy will be strong. At this time of year, families around the country sharpen their pencils and do the math to eke out a little more for their children. We need to do the same on the tax bill, summoning the energy and resolve to push back against it. In the spirit of the season, we need to join together to be one Big Voice for Little Kids and demand that Congress cast its net to cover all children, regardless of their family’s income.