Babies from all over the nation stormed state capitals in the spring of 2018. Families met with legislators, shared their stories and spread the word about what babies need to thrive in their states and communities. 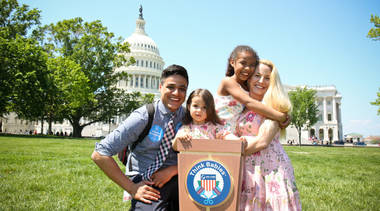 All the rumbling was thanks to ZERO TO THREE’s Think Babies™ state partners who built local Strolling Thunder™ events off the national Strolling Thunder that was held in Washington DC on May 8th, 2018. These partners engaged families and lawmakers in rich, baby-focused conversations and created their own Think Babies drumbeat via social media and a visible family presence in each of the state capitals. Here are a few highlights of those special baby-filled days:

The goal for this state work was to build awareness and advance state infant toddler policies. In addition to rolling out their own version of Strolling Thunder, each of the organizations was in the process of developing an Infant and Toddler Coalition that would continue the work after the event. Coalitions focus on one or more of the four Think Babies policy priorities as they make decisions and develop plans for the future.

Explore more from Public Engagement and Political Will Building