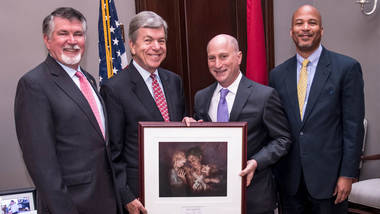 WASHINGTON, D.C. — ZERO TO THREE presented Senator Blunt with its Baby Champion Legislative Leadership Award on June 27. This honor recognizes members of Congress and others who make babies and young children a national priority, and who fight to be big voices for little kids.

“The science is clear - babies’ brains grow faster between the ages of 0 and 3 than at any later point in life. In fact, their brains form more than 1 million new neural connections every second,” said Matthew Melmed, ZERO TO THREE Executive Director. “Nurturing relationships, early learning experiences and good health and nutrition can strengthen those connections, laying the foundation for the rest of their lives. With baby champions like Senator Blunt on board, we can ensure a strong future for us all.”

As chairman of the Senate Labor-HHS Appropriations subcommittee, Senator Blunt is a leader in setting Congressional funding priorities for the U.S. Department of Health and Human Services (HHS), which includes critical funding for babies and toddlers. In the Fiscal Year 2018 Omnibus Appropriations bill, HHS received unprecedented funding levels for young children. Federal appropriations for the Child Care and Development Block Grant (CCDBG) were nearly doubled for FY2018, Early Head Start received an increase of $115 million for expanding that program, and, for the first time ever, Congress funded Infant and Early Childhood Mental Health grants.

“Making sure babies and toddlers have access to early education and medical care is vital to their development and overall well-being,” said Blunt. “This year’s government funding bill significantly increased resources for programs targeted toward early education and childcare, and I’ll continue prioritizing investments in federal programs that help families create a better future for their children.”

Families from all 50 states and the District of Columbia gathered on Capitol Hill on May 8 as part of ZERO TO THREE’s second annual Strolling Thunder™ event, sharing their stories with their Members of Congress and urging them to take action for stronger families, vibrant communities, and a prosperous country.

ZERO TO THREE works to ensure all babies and toddlers benefit from the family and community connections critical to their well-being and development. Since 1977, the organization has advanced the proven power of nurturing relationships by transforming the science of early childhood into helpful resources, practical tools and responsive policies for millions of parents, professionals and policymakers. For more information, and to learn how to become a ZERO TO THREE member, please visit zerotothree.org, facebook.com/zerotothree or follow @zerotothree on Twitter.