Despite uncertainty this year, federal and state policymakers made progress for babies. 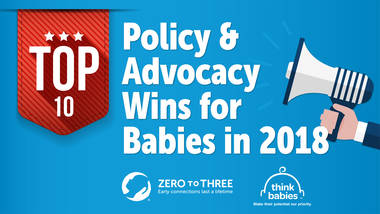 At the beginning of this past year, programs that provide babies and their families with vital support faced recurring uncertainty. Yet infant-toddler advocates showed up on Capitol Hill and in state capitals across the country to urge their leaders to prioritize babies. As we look back on 2018, ZERO TO THREE is excited to celebrate some big wins for our little ones, including:

As we look to 2019, with officials starting their new terms in Congress, governors’ mansions, and state legislatures in January, we have a prime opportunity to make each and every one of them a champion for babies. Through the collective voice of advocates, like you, we can continue to push policymakers to help us prioritize babies and families – and our future.