New Report Reveals Best and Worst States to be a Baby 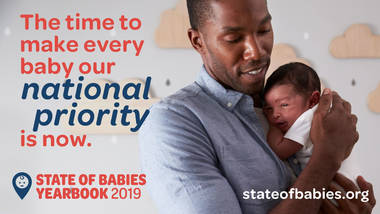 WASHINGTON—The state where babies are born and raised during their first years of life makes a big difference in their well-being, according to a report released today by early childhood development nonprofit ZERO TO THREE and nonpartisan research organization Child Trends.

The State of Babies Yearbook: 2019 is a first-of-its-kind resource that seeks to bridge the gap between science and policy with national and state-by-state data on the well-being of America’s babies.

The data show that babies in many states face persistent hardships—such as food insecurity, unstable housing, and exposure to violence—that undermine their ability to grow and thrive. Notably, as many as 45 percent of infants and toddlers live in poor or low-income households, challenging their ability to meet basic needs.

“The first three years of life will shape every year that follows, and development during this time has an enormous impact on how a child learns and grows throughout his or her lifetime,” said Myra Jones-Taylor, chief policy officer at ZERO TO THREE. “Rather than labeling babies ‘at-risk,’ we should stamp ‘unlimited potential’ on each tiny onesie to change the frame for policymaking.”

“While all states have room to grow, some are doing better to help give our youngest children a strong start in life,” said Sarah Daily, a lead researcher for the Yearbook and a senior research scientist at Child Trends. “The Yearbook is a critical resource states can use to make sure their policies and programs are working to provide optimal outcomes for infants and toddlers.”

The Yearbook compiles nearly 60 indicators—specifically for children ages 0 to 3—to measure progress in the domains of Good Health, Strong Families, and Positive Early Learning Experiences. Noteworthy differences among states exist in these indicators:

“For the first time, we’re telling the state-by-state story of America’s babies, and the picture isn’t as rosy as you might think,” said Jones-Taylor. “The data show that doing right by our infants and toddlers will require policies based on sound science and budgets that make babies a priority. Delay is not an option.”

Noteworthy differences among regions include:

The Yearbook uses a transparent ranking process to group states into one of four tiers to provide a quick snapshot of how states fare on the selected indicators and domains. These tiers represent four groupings of states that are approximately equal in size and ordered from highest to lowest performing. The following system designates a given state’s placement in one of the four tiers: 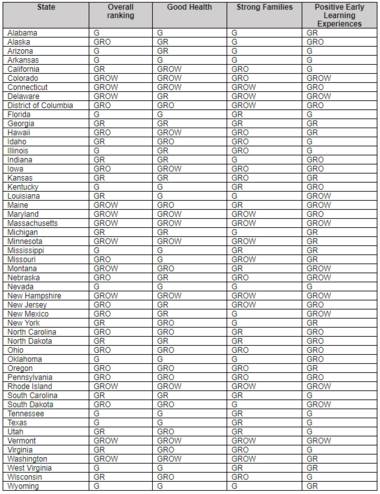 A Matter of Equity

Today, 51 percent of the nation’s babies are children of color, many of whom experience the additional challenge of racial bias. Because of historical and structural inequalities, children of color are more likely to live in low-income families, be born with low birth weight and live in environments that challenge their families’ security.

Consequences of that inequality include poverty rates two to three times higher than their white counterparts, infant mortality rates nearly double those for white children, greater likelihood of living in unsafe neighborhoods, experience unstable housing and to have been exposed to one or more potentially traumatic experiences.

“The nation’s children are increasingly diverse, and by continuing to fail babies of color, the nation’s policy choices put our future at risk,” said Jones-Taylor.

ZERO TO THREE works to ensure all babies and toddlers benefit from the family and community connections critical to their well-being and development. Since 1977, the organization has advanced the proven power of nurturing relationships by transforming the science of early childhood into helpful resources, practical tools and responsive policies for millions of parents, professionals and policymakers. For more information, and to learn how to become a ZERO TO THREE member, please visit zerotothree.org, facebook.com/zerotothree, or follow @zerotothree on Twitter.

ZERO TO THREE created the Think Babies campaign to make the potential of every baby a national priority. When we Think Babies and invest in infants, toddlers, and their families, we ensure a strong future for us all. Learn more at thinkbabies.org or follow @ZEROTOTHREE on Twitter.