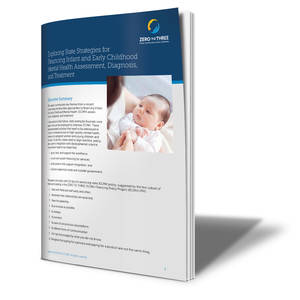 Children’s earliest experiences impact their brain formation and in turn, their social and emotional, physical, cognitive, communication, and sensory and motor skills development. Recognizing the tremendous opportunities and risks associated with this critical time, states are increasingly investing in promoting infant and early childhood mental health (IECMH), defined as the capacity of a child from birth to age five to experience, express and regulate emotions; form close, secure interpersonal relationships; and explore his/her environment and learn, all within the context of family and cultural expectations. ZERO TO THREE released two papers in 2018 and 2019 highlighting strategies states are employing to support children’s IECMH. Highlights from Alaska include:

Alaska is one of twenty states and jurisdictions participating in ZERO TO THREE’s IECMH Financing Policy Project that supports states in improving IECMH policy and practice, with a focus on financing.