Here are 5 facts from the State of Babies Yearbook: 2020 that demand attention today. 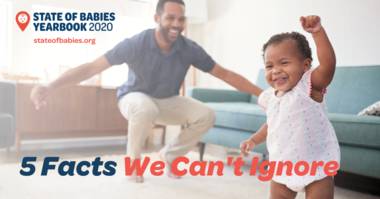 12 million human stories are just beginning. That’s the number of infants and toddlers in the United States today. Together, those narratives reveal how our nation prioritizes the unlimited potential of young children. The public health crisis and widespread civil unrest we are experiencing underscore the urgency of attending to babies; it’s the current state of the world that sets the tone and establishes the setting of every baby’s first chapter and influences all that come after. The State of Babies Yearbook: 2020 uses words, numbers, science and policy to shed light on those early, crucial years that can set the course of an entire lifetime. We cannot afford to ignore what it lays bare if we hope to emerge from difficult times as a better nation. It’s simple really—our future depends on babies.

Here are 5 facts from the State of Babies Yearbook: 2020 that demand attention today.

Research shows that poverty can serve as a roadblock on the way toward achievement and employment. Alarmingly, the Yearbook shows that 20% of U.S. babies live in poverty. There are more young children experiencing uncertain financial situations in our nation than in Lithuania, Russia, and Mexico—turns out, we’re 32nd in child poverty among 38 economically advanced countries.

FACT: The cost of child care gives college a run for its money.

Simply put, child care keeps our economy running. And yet, the cost of infant care exceeds the cost of college tuition in more than half the country. Let that sink in. Out-of-control costs are an even bigger burden for single-parent households—across states, the cost of care makes up 25%-89% of single parents’ median income.

FACT: Rates of mortality among America’s mothers and babies are alarming.

Our national maternal and infant mortality rates are higher than rates found in other industrialized countries. Yearbook data show that Maternal mortality, a critical indicator of Good Health, occurs at a rate of 17 deaths per 100,000 live births nationally. Across states, 6 in 1,000 babies born will not survive to see their first birthday. In some states, 9 in 1,000 babies born will not survive. What’s most alarming is that Black moms die at 3 times the rate of White moms, and Black infants die at almost 2 ½ times the rate of White infants.

Our nation is more diverse than ever, which adds to the richness of our society. Millennials, the current generation of parents, are the most diverse in the country’s history. And 51% of all the nation’s babies are children of color. We know what all babies need to thrive: Good Health, Strong Families, and Positive Early Learning Experiences. Yet, key indicators of well-being reveal that babies of color are far more likely than White babies to begin life facing early challenges that research shows can jeopardize their development.

FACT: Getting involved, informed can make a difference.

As we begin to face the long-term consequences of the Coronavirus Pandemic, it’s more urgent than ever that we commit to our nation’s future—babies. Federal and state-level policies and programs can make a difference in young children’s lives. In fact, many policy solutions already exist that have a positive effect on babies’ early development and family stability. You can take steps today to make your voice heard on behalf of infants and toddlers.

Learn more about what you can do to be an advocate for babies in your state at stateofbabies.org/take-action.