What the State of Babies Rankings Really Mean

The State of Babies Yearbook provides a snapshot of how the nation’s babies are faring nationally and by state across 60 indicators in three policy areas essential for a good start in life: Good Health, Strong Families, Positive Early Learning Experiences. Here's what those rankings mean. 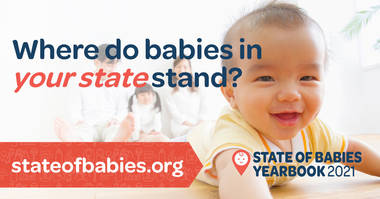 About every 8 seconds, a baby is born in the United States. Those tiny fingers, those spellbound eyes, that newborn smell! New parents often spend hours upon hours gazing at their baby and daydreaming about their future.

Babies are our next generation of parents, workers, and leaders. Where they are born shouldn’t determine their outcomes or limit their potential. However, as State of Babies Yearbook data continue to show, the state in which that baby is born can make a big difference in their chances for a strong start in life.

In every state, significant disparities are hurting the ability for babies and families of color to thrive, often driven by historical and structural inequalities. By nearly every measure, children living in families with low income and children of color face the biggest obstacles now and even prior to COVID-19. The current crisis has further exposed and exacerbated these gaps and structural barriers, which have harmful and life-altering effects that begin even before birth and can last a lifetime.

The State of Babies Yearbook: 2021  provides a snapshot of how the nation’s babies are faring nationally and by state across 60 indicators in three policy areas essential for a good start in life: Good Health, Strong Families, Positive Early Learning Experiences. These indicators include everything from being read to daily, to mental health, to crowded housing, and much more.

We rank each state on the various indicators and categorize them into four tiers, from lowest to highest-performing. The top tier (W) is the top 25% of states while the bottom tier (G) is the lowest performing 25% of states.

What does it mean to be a W state?

States that fall in the top 25% are “Working Effectively” and show that through their strong policies, they are paving the way for other states to follow accordingly. Typically, these states have lower numbers of uninsured low-income infants and toddlers, low food insecurity, Medicaid expansion, support of paid leave and child tax credits, and quality early learning requirements. But even in the most remarkable states, we see that “best” isn’t good enough.

The reality is that all states can do better for babies. Even on indicators where the state average is strong, children of color or those with low income can have substantially worse experiences. It’s important to remember that the placement for the indicators shows how the state is doing relative to all other states, not measured against an absolute standard.

For example, while very few babies with low income are uninsured in Delaware, only 26% of babies receive developmental screenings. Oregon is at the top in developmental screening, but 25% of Oregon’s babies have had at least one adverse childhood experience. In Vermont, parents have one of the highest rates of reading and singing to their babies every day, however 25.3% of mothers report less than optimal mental health and infants and toddlers are removed from homes due to maltreatment at nearly double the national average rate per 1,000.

What does it mean to be a G state?

States that fall in the bottom 25% are “Getting Started” in making babies and toddlers a priority. These states typically have higher rates of infant mortality, more babies born at a low birth weight, more housing instability, more barriers to health care, and lower quality early learning requirements. However, just because a state falls in the “G” category, they may still be making strides – and in some instances – rank higher in a particular category than a “W” state.

Remember, it’s not about the ranking, it’s about the babies. We must focus on the needs and disparities indicated within each state itself, as well as how our national data compares to other industrialized nations. New this year, visitors to stateofbabies.org can compare specific indicators across states and easily see how a particular state compares to all other states and the national average.

To create a brighter future for all, we must implement policies based on science and budgets that make babies a priority. Together, we can call on federal and state lawmakers to Think Babies and work to improve outcomes for babies and families.