Parent Advocates from Across the Country to Tell Congress: It’s Time to Think Babies

Today, parent advocates from all 50 states and Washington, DC will meet virtually with their Members of Congress as part of the annual Strolling Thunder™ advocacy day. The event, now in its sixth year, is hosted by ZERO TO THREE, the nation’s leading early childhood development nonprofit dedicated to ensuring all babies and toddlers have a strong start in life. Families are welcoming their Members of Congress into their homes to share their experiences raising young children and to discuss what policies and programs are needed to help their babies thrive. 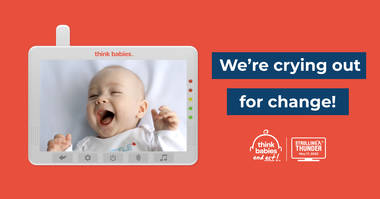 “Our nation is grappling for the third consecutive year with the impacts of the pandemic that has worsened inequities for babies and families of color and with low-incomes,” stated Miriam Calderón, chief policy officer at ZERO TO THREE. “Yet, our nation’s policymakers appear poised to move on without establishing family-focused policies that babies and families need to survive, recover, and prosper. I am grateful to the Strolling Thunder advocates for their efforts to call attention to the on-going and immediate stressors families are facing and demand action on a bold policy agenda. This is a critical moment for Congress to hear directly from families on how to make babies a national priority. Our future depends on it.”

Strolling Thunder has helped constituent families and their babies meet with their elected officials – from state capitals to Capitol Hill – since 2017. During these meetings, parent advocates share their experiences about raising young children and what they need to support their babies’ healthy development. The event is a cornerstone of ZERO TO THREE’s Think Babies™, a national movement and a call to action for policymakers to prioritize the needs of infants, toddlers, and their families and to invest in our nation’s future. Federal priorities include:

Since its inception, Strolling Thunder has become one of the most anticipated advocacy events on Capitol Hill. The event has driven increased advocacy and political will for infant-toddler issues, drawing more than 6,500 families and advocates at events across the country and more than 700 visits with policymakers on both sides of the aisle.

During the meetings, advocates will use data from the recently released State of Babies Yearbook: 2022, which bridges the gap between science and policy with national and state-by-state data on the well-being of babies in the United States. The fourth annual Yearbook provides an in-depth look at the experience of our nation’s babies and their families. This year’s report demonstrated how the mental and physical health of our nation’s infants and toddlers has continued to be jeopardized by the COVID-19 pandemic. Findings include:

Families can learn more about ZERO TO THREE’s Think Babies, as well as how they can get involved to advocate on behalf of their own children and communities, at thinkbabies.org.