Babies in Early Head Start (EHS) can sleep more soundly at naptime as the Congress has reached agreement on Fiscal Year 2012 spending that will sustain the expansion of EHS and Head Start that began with the American Recovery and Reinvestment Act (ARRA).

Final passage came on Saturday, averting a government shutdown. Overall, early care and learning was clearly a priority in the portion of the omnibus bill that funds the Departments of Labor, Health and Human Services, and Education, a tribute to the field’s advocacy. The Child Care Development Block Grant (CCDBG) received a $60 million increase, with a small bump up to $107 million for the infant-toddler set-aside, and Part C/Early Intervention received a small increase of $5 million. Here is a snapshot of how infants and toddlers fare overall:

The Maternal and Child Health Block Grant (MCHBG) had a small decrease of $10 million. However, Healthy Start (an infant mortality initiative) received a slight increase, while the National Institute on Child Health and Development (NICHD) received a $6 million increase and Community Health Centers received level funding. The National Child Traumatic Stress Network (NCTSN) received an additional $5 million in funding instead of the drastic cuts proposed by the Administration and a House bill.

Of several discretionary child welfare programs, all received level funding with the exception of the Abandoned Infants Assistance Program, which decreased by $30,000. Low Income Home Energy Assistance (LIHEAP) received a significant cut of a little over $1 billion. In addition, the LIHEAP contingency fund of about $200 million was eliminated. This is particularly concerning because of the number of infants and toddlers whose families rely on LIHEAP to heat or cool their homes. (To find out how many babies benefit from LIHEAP in your state, see page 3 of your State Baby Fact Sheet.)

As mentioned above, appropriators gave Head Start and Early Head Start a high priority this year, receiving a $424 million bump in funding. This appropriation will allow for the retention of the 61,000 expansion slots for EHS from ARRA. CCDBG received a $60 million increase, and the infant-toddler set-aside received a small bump up to $106 million. Striving Readers, the birth through grade 12 literacy program, received $160 million; and funding for Promise Neighborhoods, the comprehensive “cradle to career” education initiative was doubled. While Race to the Top received $550 million, an allocation for the Early Learning Challenge (ELC) has not been determined.

See the table below for program-by-program comparisons of this funding bill versus FY 2011 appropriations. 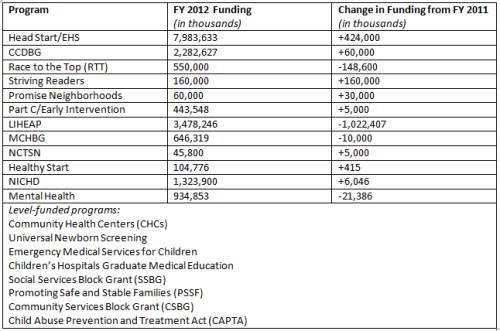