Virginia's Office of Early Childhood Development (OECD), was launched on July 1, 2008, to maximize opportunities for Virginia's children to reach kindergarten healthy and prepared for school success. 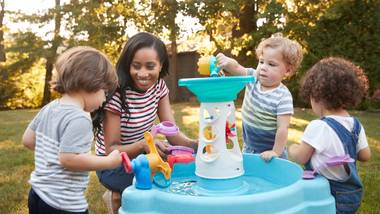 Since 2008, the office has worked to expand access to and coordinate the state’s systems of high-quality early childhood development programs for children birth to age five, including the Virginia Preschool Initiative, Head Start, child care subsidies, and provider services.

The state-level office aims to provide a seamless continuum of services to Virginia’s youngest children and their families. The impetus for the office’s development came from the state’s Start Strong Council, established by former Governor Jim Kaine early in his gubernatorial term to develop a plan to expand access to quality pre-kindergarten for Virginia’s four-year-old’s. Additionally, in August 2006 former Governor Kaine established the Governor’s Working Group on Early Childhood Initiatives, which brought together public and private partners to coordinate executive branch early childhood policy and programs. In July 2007, the Council provided the Governor with six recommendations regarding birth-to-five services, including the development of a state-level office to coordinate existing early childhood programs.

The Office of Early Childhood Development functions under two government agencies: the Department of Education and the Department of Social Services. The office also has a liaison to the Virginia Department of Health, linking the coordination of early childhood programs housed in that agency, including early intervention services funded through Part C of the Individuals with Disabilities Education Act (IDEA). The office has worked to examine the resources and programs that are housed within the agencies that impact young children and their families so that federal, state, and local funding streams can be better coordinated to maximize impact.