ZERO TO THREE is proud to collaborate with East Los High, the award-winning Hulu original series that tells authentic stories about young people in East LA.

Throughout the past four seasons of this addictive drama, Ceci (Danielle Vega) has tackled teen pregnancy and single young motherhood with gusto and courage. Ceci is fiercely devoted to her toddler, Isela, and will do whatever it takes to give her a better childhood than she had. Motherhood is bringing out strengths that Ceci never knew she had. Life hasn’t been easy, and even though Ceci has a lot of grit, she needs support.

Together, East Los High and ZERO TO THREE are launching an original vlog series in which Ceci takes an honest look at the challenges and triumphs every parent faces. She shares her own perspective and lessons learned to help inform and inspire other parents of young children. Be sure to check back weekly as we will be posting new videos through early April.

Take a look at the latest video: Why I Was Feeling Him 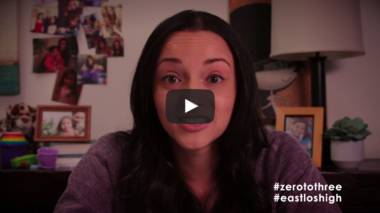 To see how Ceci’s journey as a young mom has developed so far – along with all the drama, heartbreak, triumphs she’s been through, watch East Los High and watch Ceci reflect on being a teen mom in this earlier vlog series.

Watch all of Ceci's vlogs where she gets real about the challenges and triumphs every parent faces.