My baby is 8 months old and isn’t crawling yet—is this typical?

Learning to crawl can be complex. Here’s what to expect and when to contact a healthcare provider with any concerns.

Q: My 8-month-old isn’t crawling yet. All the other babies in her playgroup are. Should I be worried?

A: As long as your child is showing an interest in exploring her surroundings, there is usually no reason to be concerned about her development. Most babies start to crawl between 6 and 12 months. But there is a wide range of what’s “normal” when it comes to reaching developmental milestones—just because your daughter hasn’t crawled by 8 months doesn’t mean that there is something wrong with her. She’s still within the typical age range for developing this skill and learning to crawl. My own children did not crawl until 10 months. In fact, some babies never crawl at all. They go straight to standing, cruising, and then walking.

If your child has already achieved other physical developmental milestones for her age, she is probably doing fine. These milestones include rolling from her stomach to her back and vice versa, getting herself into a sitting position from lying belly-down on the floor, sitting up without support for a few minutes, and “combat crawling”—lying on her stomach and pulling herself along with her forearms.

If your child is not doing these things, consult with your pediatrician. Some children who have delays in achieving motor skills may have a neurological or developmental problem that can be addressed through physical or occupational therapy. In other cases, however, a developmental delay is simply due to a lack of opportunity for movement. Children who are held a lot or are put in bouncer seats or walkers for long periods have less time to practice using their bodies. Once they have more “tummy time” on the floor, they catch up quickly.

From “Your Child’s Behavior,” a column written by ZERO TO THREE in American Baby magazine. 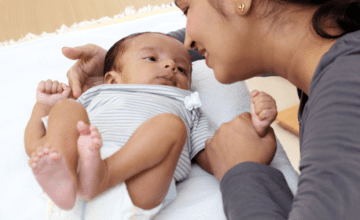