How does nutrition affect the developing brain?

Brain development is most sensitive to a baby's nutrition between mid-gestation and two years of age. 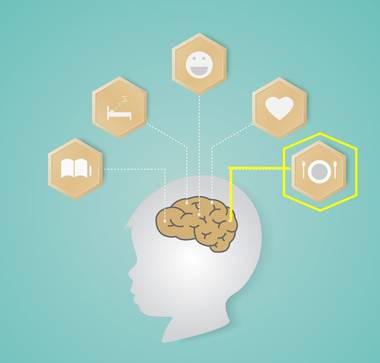 Children who are malnourished–not just fussy eaters but truly deprived of adequate calories and protein in their diet–throughout this period do not adequately grow, either physically or mentally. Their brains are smaller than normal because of reduced dendritic growth, reduced myelination, and the production of fewer glia (supporting cells in the brain which continue to form after birth and are responsible for producing myelin). Inadequate brain growth explains why children who were malnourished as fetuses and infants suffer often lasting behavioral and cognitive deficits, including slower language and fine motor development, lower IQ, and poorer school performance.

A baby’s birth weight–and brain size–do depend on the quality of his or her mother’s nutrition during pregnancy. Pregnant women should gain about 20 percent of their ideal pre-pregnancy weight (e.g., 26 pounds for a 130-lb woman) to insure adequate fetal growth. This requires consuming an extra 300 calories per day, including 10-12 extra grams of protein.

After birth, brain growth depends critically on the quality of a child’s nutrition. Breast milk offers the best mix of nutrients for promoting brain growth, provided that breast-fed infants receive some form of iron supplementation beginning around six months of age. (Most infant cereals are fortified with iron, and breast-fed babies require this supplementation at six months whether or not their mothers are iron-deficient.) Iron deficiency has been clearly linked to cognitive deficits in young children. Iron is critical for maintaining an adequate number of oxygen-carrying red blood cells, which in turn are necessary to fuel brain growth. Bottle-fed babies should receive formula that contains iron.

Because of the rapid pace of myelination in early life, children need a high level of fat in their diets–some 50 percent of their total calories–until about two years of age. Babies should receive most of this fat from breast milk or formula in the first year of life, and breastmilk remains an excellent source of liquid nutrition into the toddler years. However, whole cow’s milk can be introduced after the first birthday and provides an excellent source of both fat and protein for toddlers in the second year. After two years of age, children should begin transitioning to a more heart-healthy level of dietary fat (no more than 30 percent of total calories), including lower-fat cow’s milk (1 or 2%).