When Amber was told her newborn son was addicted to opiates and that she wouldn’t be taking him home, she and her husband became solely focused on one thing: reunification. Eleven months later, with the help of a Safe Babies Court Team, their son is waking up each morning at home with his parents. 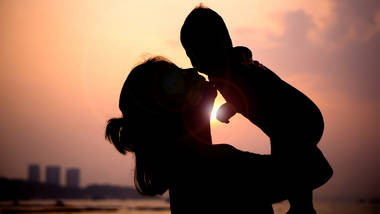 Almost two-thirds of of infants and children who participate in Safe Babies Court Teams find permanent homes with members of their families.

ZERO TO THREE’s Safe Babies Court Team approach transforms child welfare into the practice of child well-being by using the science of early childhood development. The program connects babies and their families with the support and services they need to promote healthy child development, while at the same time ensuring speedier exits from the system.

While pregnant, Amber was taking Subutex, a drug that reduces the symptoms of heroin and opiate withdrawal. But it was too late. Both her addiction and the withdrawal medication resulted in her son being born addicted to opiates. It was during his month-long recovery at the hospital that she was notified that she would not be given custody of her son.

It killed me the day I found out my son wouldn’t be coming home… But my husband, Gary, and I had our hearts and minds set that we would do whatever it takes to get our son back.

At a recent Safe Children Coalition roundtable meeting, Amber described how she and her husband sought support from local programs. They were referred to the Early Childhood Court (ECC) program, a system of child welfare services focused on reunification. The ECC program is a strategy that includes both a state-level systems approach and a local-level implementation approach, with their work based off of ZERO TO THREE’s Safe Babies Court Team core components. The program works with the child welfare system to identify infants and toddlers going into foster care who have parents or other custodians who want their children back.

After entering the program, Amber and her husband immediately received substance-abuse classes, infant mental health education, parenting classes, and a case-management plan. The program typically lasts for three-to-six months, and during that time, Amber and her husband regularly visited their son who was first placed in a medical foster homes and then in foster care.

Their son, now 10 months old, has been reunited with his parents and wakes up each day at home. Amber has been clean for 11 months.

Florida’s Heroine Crisis Is Affecting the Most Vulnerable

Unfortunately, Amber’s experience is becoming more common. Amber lives in Manatee County which is at the heart of Florida’s heroin crisis. From January to November 2015, emergency personnel in Manatee revived 1,200 people who overdosed on heroin and other opiates.

This program does need to keep going and I hope in the future other counties will bring this to their community.

Baby Court, and other Safe Babies Court Team sites, work to change local child welfare systems to improve outcomes for children and their families, and to prevent future court involvement in the lives of young children. The approach is successful.

Families who participate in a Safe Babies Court Team are embraced by a team and given targeted and timely services. The adults feel valued as individuals and as parents while they learn how to support the healthy development of their children. Results show that children are reaching permanency three times faster than infants and toddlers in the general foster care population. Almost two-thirds of them find permanent homes with members of their families while only one-third of infants and toddlers in the general population exit foster care to family members.

While reunification isn’t always the outcome of the Safe Babies Court Team approach, its success has attracted the attention of U.S. Rep. Vern Buchanan of Florida as he fights for solutions at the federal level to address the heroin crisis. His dedication to addressing the crisis resulted in President Obama signing the Comprehensive Addiction and Recovery Act into law, a bill he co-sponsored, to authorize $181 million of increased funding to address heroin and opiate addiction.

Rep. Buchanan recently called for immediate funding from CARA to be made available to Manatee county, and he sought input from community leaders about which programs to support.

For the sake of these kids, we all have to work together and come together.

It was at this roundtable that Buchanan heard Amber’s story in person. In a county where 652 children were removed from their home in 2015 alone, Amber’s story of overcoming addiction and reuniting with her son is testament to how this coordinated, community-based solution can improve outcomes for infants, toddlers and their families.

“If you’re serious about wanting your kids back and to live a clean and happy life, and be productive members of society, then you will have no problem completing Baby Court,” Amber said. “This program does need to keep going and I hope in the future other counties will bring this to their community.”

Share the tweet below to show your support for the impact of the Safe Babies Court Team approach.

Explore more from Opioids and Babies: A Bipartisan Call to Action