Here’s to Healthy Eating: Habits to Start and Habits to Avoid

Here's how to start healthy eating habits with your infant or toddler. 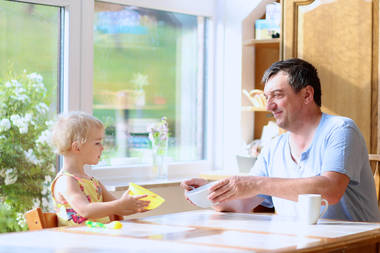 Is your child struggling to try to new foods? Ask them if they can lick it! As silly as it sounds, even licking a new food is a way to introduce the taste. You may have to introduce a new food more than 10 times before a child will eat it. Learn this and other strategies in our tip sheet.

Offer three to four healthy choices at mealtimes. Make sure that at least one of the choices is something the child likes to eat.

Providing two to three health snacks per day. If children don’t eat a lot at a meal, they will have a healthy option for a snack.

Let children take a “dip.” Children like to play with their food. Healthy dips, such as low-fat salad dressing, ketchup, salsa, yogurt, or hummus, make eating fun. Children can dip vegetables, fruits, and even meat!

Offer a new food an “old” way. If you want children to try something new—like fish—offer it to them the first time with breading on it so it looks like something familiar (such as chicken nuggets).

Be silly. Make a face out of vegetable slices (cucumber slices for eyes, shredded carrots for hair, a cherry tomato nose, a red pepper slice for a smile). Or make “sweet surprise stew” where you hide fruit at the bottom of a cup of yogurt. When children are having fun, they are more willing to try something new.

Give it a licking. If children don’t want to put a new food in their mouth, ask them if they can lick it. As silly as it sounds, even licking a new food is a way to introduce the taste. You may have to introduce a new food more than 10 times before a child will eat it.

Look for ways to include and respect the family’s culture. Food is an important way children experience their cultures. Talk with parents about recipes they frequently prepare at home, and discuss ways you might adapt them to make them more healthful, if this is an issue.

When it comes to eating, you and the child each have your own jobs to do. Your job is to provide each child with healthy food choices and pleasant meal and snack times. It is the child’s job to decide which of these healthy foods to eat and how much to eat. This approach helps children learn to listen to their bodies and to make healthy food choices.

Nagging or making deals with children. “Just two more bites, just two more bites!” “If you eat your vegetables, you will get dessert.” Strategies like these don’t work in the long run. Children who learn to make deals about eating quickly learn to make deals and ask for rewards for doing other things—like cleaning up. Soon they won’t do anything unless there is a reward for it!

Eating with the television on. It is true that children will often eat more when they are placed in front of a television for mealtime. However, this is because they are paying so much attention to what is on television, they are not paying attention to whether they are hungry or full. One of the most important healthy eating habits for children to learn is to pay attention to their body’s cues and eat only until they are full. Also, mealtimes are important opportunities to talk and connect with children. There is no chance to bond this way if everyone is watching television.