Learning two languages from birth changes the way a child’s brain is wired—just one of the many gifts that bilingualism offers to young children. What’s the takeaway for families? Use all your home languages around your baby and toddler. Children start listening—and learning—right from the start! 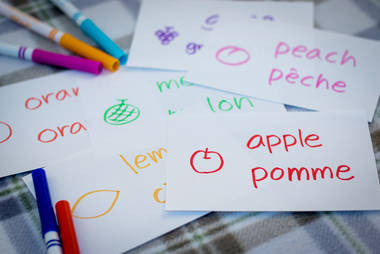 My friend recently posted a video of Alice, her eight-month-old, sitting at the kitchen table babbling to her husband in Swedish. No, her baby wasn’t actually speaking Swedish, but to anyone listening to the video, her baby’s ba’s and ga’s and da’s had the sound and rhythm of Swedish. My friend’s husband is a stay-at-home-dad, and Swedish is his home language, so that’s how he talks with Alice and how Alice talks with him. Chances are, Alice babbles very differently to her mom, who only speaks to her in English. That’s the magic of becoming a dual-language learner from birth—you start as a bilingual listener and babbler, and move on from there.

There’s some evidence that dual language learning may begin even earlier, in the womb, as babies listen to the sounds and languages surrounding them. Newborn babies show a preference for languages that sound similar to the ones they heard during pregnancy. And babies born to bilingual mothers prefer listening to both of those languages that mom speaks over others. What’s the takeaway for families? Use all your home languages around your baby—babies start listening early!

What about this idea that learning two languages slows down children’s language development? Actually young dual-language learners achieve the same language milestones as monolingual children when it comes to babbling, saying their first word, understanding familiar words, combining words (“Mama, up!”), and reaching a 50-word vocabulary. But while bilingual children are learning words at the same rate as their monolingual peers, these words are divided across two languages. When you combine their total vocabulary, dual-language learners and monolingual toddlers have virtually identical vocabularies. So, if a professional raises concern that your child may have a language delay—and your child has been exposed to more than one language from birth—ask that any language assessment is conducted in both of your child’s home languages so professionals can gain an accurate picture of her skills and needs.

We’ve known for a long time that a toddler’s vocabulary grows when they are exposed to more language, and richer language. For a dual-language learner, the same is true, but parents also need to keep in mind the issue of balance. Balanced exposure to each home language is a critical ingredient for true bilingualism. You can ensure your child has many opportunities to hear word labels, to talk, to ask and answer questions, to hear rich language, to sing songs and to hear stories in both languages.

This can get more difficult when children are older and enter formal school. Studies on family language patterns find that once children enter school, they use more English and, as a result, their parents use more English too. It’s natural that a child’s language preferences—the language they use and respond to most—is the one parents gravitate to, but it makes bilingualism tough to sustain. The takeaway: The best way to support a dual-language learner is to continue using your home language(s), even if your child’s language patterns shift. Some families make it a habit (or a rule!) to only use the home language after school through bedtime, for example.

Bilingualism has many benefits for children—including babies like Alice. She is connecting with her dad in the language that is ‘home’ for him and for her other family in Sweden. She’ll be able to listen to family stories, get their jokes, and have real relationships with grandparents, aunts, uncles and cousins. Communication fuels connection, which is at the heart of any relationship.

And the benefits of bilingualism extend beyond that all-important link to family, community and culture. Research shows that bilingual children have a better working memory (which holds, processes and updates information over the short term), than children who speak only one language. Bilingual children also show better executive functioning skills, especially the ability to think flexibly, focus their attention, and filter out distractions, as compared to monolingual children. One study even found that dual language learners showed an improved ability to see others’ perspectives as compared to monolingual peers.

All the cognitive skills that go into developing a dual language system in the brain—the ability to discriminate between the sounds of two languages, to tune into which people speak which language, to pay attention to aural and gestural cues when communicating—seem to support a constellation of cognitive skills that benefit children broadly in the short term and throughout their lives. For Alice and so many children, learning two languages from birth changes the way their brains are wired—just one of the many ways that bilingualism opens the world to them.