Use these talking points to engage community members in conversations about paid family and medical leave and urge policymakers to prioritize paid leave. 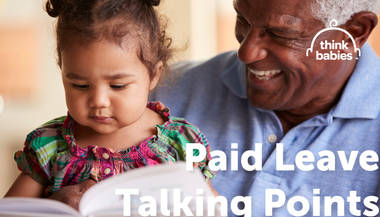 Note: These talking points address paid family and medical leave which allows workers to take paid time off to care for their families or themselves. Paid family leave most often refers to time taken to allows families to care for a baby after birth or adoption. Paid medical leave refers to time taken if a worker, their child, or other family member has a serious health need.

1. Paid family and medical leave gives families paid time off to care for a new child or to care for themselves or their baby when they are facing a serious health condition – without sacrificing economic security.

2. While many workers have unpaid time off through the Family and Medical Leave Act of 1993, the vast majority of workers do not have paid family or medical leave.

3. Paid leave helps families build secure relationships with their babies that are so important to babies’ long term learning and success. It also benefits babies’ health, and is even a protection against infant mortality!

4. The lack of a national paid leave policy disproportionately impacts Black and Latinx families and babies.

5. 84% of voters want a national paid family and medical leave plan for all workers.

Without Paid Leave, Out of Economic Necessity, Families Forego Time Caring for Their Babies