Every Baby Has a Story—Child Care Policy Helps Shape It

It stings when child care is dismissed as “glorified babysitting,” or just diaper-changing. We know better—and policymakers should, too. 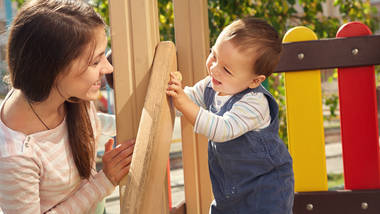 More than 25 years after the Child Care and Development Block Grant (CCDBG) was created, new energy around child care could signal that the next big step to expand federal support is in the offing. What’s more, infant-toddler care is finally central to the conversation. Parents of babies are increasingly fed up with the almost universal infant-toddler child care dilemma: how to find it, how to pay for it, and how to allay the anxiety that they don’t have good options for their babies. Their frustration has made its way into the media, onto the presidential campaign trail, and now to Congress. The greatest benefit could be raising the awareness that for babies, child care is a brain construction site.

Almost every working parent with a baby has a child care story. More often than not, it’s nightmarish. Partnering with the National Women’s Law Center, ZERO TO THREE began collecting these stories through our Think Babies™ campaign. They read like the talking points for what needs to be fixed in our national policy. It starts with the struggle to find care. One family with both parents working wrote about beginning their child care search during the early stages of pregnancy, contacting more than 30 providers who did not take infants or had waiting lists of up to two years. Their search for care with some level of comfort involved a not atypical trial and error approach—finding unreliable care before finally landing in the right place. Then there is the cost. Infant care in 33 states and the District of Columbia is more expensive than public college. The parents in one young family made just over the limit for child care subsidy and found the cheapest infant care was one and a half times their monthly rent. The only affordable caregiver they could find cares for 19 other children. They worry about the safety of their newborn in this care, but have no other options.

Policymakers need to take these concerns seriously. The quality of infant-toddler care is immensely important, because every baby has a story as well. While no babies responded to us directly, we do know their story is one of soaking up every experience of every day to fuel brain development proceeding at lightning speed. Those experiences spark more than one million neural connections every second, creating the architecture of the young brain for language, thinking, and reasoning. The nature of these experiences determines the foundations—strong or fragile—on which all later learning will be built.

Child care providers have stories, too. They focus, often, on the great professional rewards from getting children off to a good start, coupled with poverty-level wages. Infant-toddler teachers on average are paid less than their pre-K counterparts with similar credentials, who in turn often are paid less than elementary school teachers. Some stick it out for the joy of helping our future workers, innovators, and citizens thrive. One described how much he has loved making a difference in the lives of thousands of children and families throughout his career, pursuing first a bachelor’s degree and now a master’s degree despite the challenges of long hours and “pitiful” compensation. He firmly believes caring for babies and toddlers is professional work that should require credentials, including degrees, and higher compensation.

For others, the realities of their own family budgets force them out of the profession. One early childhood educator with a master’s degree and ten years’ experience found herself making less than $30,000 a year. With the cost of her own two children’s child care equaling her monthly take-home pay, she had to leave a job she loved. Providers forced out because their paychecks don’t reflect the value of their work results in incalculable loss. Parents end up with less than satisfactory options for babies in care now, in turn undermining the outlook for our nation’s future, which will be shaped by those brain foundations being laid today. This provider told us, “When I was in high school, I was told I could be anything I wanted. I wanted to be a preschool teacher and a mother. Turns out, in the wealthiest nation in the world, I can’t. And that is a real shame.”

It really stings when providers’ work is dismissed as “glorified babysitting,” or just diaper-changing—in other words not that hard and not that important. They know better—and policymakers should, too. Relationships matter as the context in which these experiences unfold. How experiences are delivered teaches a baby how she is valued and foundationally shapes the person she will become. Babies’ brains don’t know if adults label the place they go while their parents work as “just” child care or babysitting, not early learning. But they do know if they don’t get much interaction with their caregiver because she also tends to five or more other infants and toddlers. They also know when they get a lot of delightful interaction—the “serve and return” that is the rocket fuel of early learning and especially language—because their caregiver has fewer children and more time for each. In short, babies’ brains absorb negative experiences as well as positive ones, so policymakers should think less about labeling and more about quality.

Recent events on Capitol Hill suggest the many stories of child care are getting through. The omnibus spending bill just signed into law included the largest-ever increase for CCDBG, $2.37 billion. These funds will recoup some of the child care slots lost during the last decade as funding stagnated. They also will pump more money into boosting quality of infant-toddler care. For low-income babies, who often find themselves in poorer quality care—and for the country—the payoff can be huge. Economist James Heckman finds a 13 percent per year return on investment for high-quality, birth-to-five care.

This sizeable investment is a down payment for a more comprehensive vision of child care in America, one suitable for the engine that drives parents’ ability to work today and the early learning that will shape the workforce of tomorrow. Last year, Senator Patty Murray (D-WA) and Representative Bobby Scott (D-VA) introduced the Child Care for Working Families Act. It checks the boxes our stories and many others create: families would have to spend no more than 7 percent of their income on child care; robust funding would ensure reimbursement rates to give provider salaries on par with K-12 teachers with similar credentials; and quality would receive a huge boost, with more high-quality programs to build strong brains. To ensure infant-toddler care gets proper emphasis, services for the youngest children would receive a 90 percent federal match.

Whether policymakers rewrite the stories of child care could depend on parents, providers, the business community, and advocates helping them understand that the narrative needs to be changed. Only then will parents go to work with the peace of mind that their babies and toddlers are being well nurtured. How can we ensure that happens? Reach out to lawmakers! Tell them more stories until they get the message that America’s families need affordable, accessible and high-quality child care now!