Tribute to a Giant

99 years old and a trailblazer, Dr. T. Berry Brazelton passed away at home just two months shy of his 100th birthday. A giant in the field of early childhood development, he devoted his life to studying, nurturing and advocating on behalf of babies, toddlers and their families. 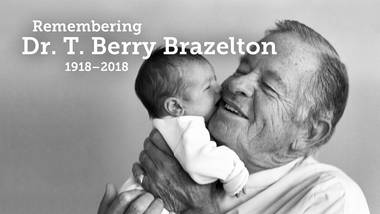 Among his many accomplishments, Berry was a founder of the National Center for Clinical Infant Programs, later renamed ZERO TO THREE, where he also later served as Board President. “He was the father of developmental pediatrics, a rigorous researcher, and an unflinching advocate for public policies to address the real needs of babies, toddlers and their families,” said Matthew Melmed, executive director for ZERO TO THREE.

Behind all the achievements and accolades, Dr. Brazelton was simply a great man, with a warm and loving spirit. He was cited in numerous publications and educational television programs for parents, all of which earned him the title, “America’s Pediatrician.” He genuinely cared about the human condition. His innate sense of connecting helped create an immediate bond with any baby, parent or caregiver he met. “He touched our souls while he helped us all be better parents and people,” said Melmed.

ZERO TO THREE was proud to present him with a Lifetime Achievement Award in 2016.

Dr. Brazelton was a Professor of Pediatrics, Emeritus of Harvard Medical School, and a Visiting Scholar at the Child Study Center at Brown University. He also founded the Brazelton Touchpoints Center at Boston Children’s Hospital in 1993 to mobilize communities around children and families in order to bring relationships back into healthcare and to transform child care into family care. One of his most notable achievements in pediatrics is his Neonatal Behavioral Assessment Scale (NBAS), an evaluation tool used worldwide to assess not only the physical and neurological responses of newborns, but also their emotional well-being and individual differences.

The author of more than 200 scientific papers and chapters, and 40 books, Dr. Brazelton is considered to be one of the foremost authorities on pediatrics and child development. As a parent advocate, he frequently appeared before Congressional committees in support of parental and medical leave bills and was appointed to the National Commission on Children in 1989. In 2000, he was honored as a Living Legend by the United States Library of Congress.

“Berry was light in this sometimes dark world,” said Andy Meltzoff, ZERO TO THREE Board member. “He made many wonderful discoveries, personally helped thousands of parents and babies, enthused and encouraged researchers, policymakers, and practitioners, and raised awareness about 0-3 in ways that caused a revolution society’s attitudes. He was truly one of a kind. The human race has lost one of its very best.”

In a short video for ZERO TO THREE’s 40th Anniversary this past December, Dr. Brazelton taped a special message inviting all of us to celebrate his birthday with him this April:

Now we celebrate his life and all that he has meant to us as a leader, pediatrician, advocate, mentor and friend. We are forever blessed to have known and worked with him. His legacy will continue through the work of ZERO TO THREE and other organizations that he helped to create and support.

As we continue to honor the life and legacy of Dr. Brazelton, we would like to include tributes from the many lives he touched over the years. Please share your thoughts, memories and condolences below. Selected quotes and stories will be used in efforts to honor his legacy at ZERO TO THREE and beyond.