How to Find Harmony When Parents Disagree

Parenting is complex work. Each day, we make countless decisions about what kids eat, how to get them to sleep, how much screen time to allow, and what rules and consequences to establish and enforce. 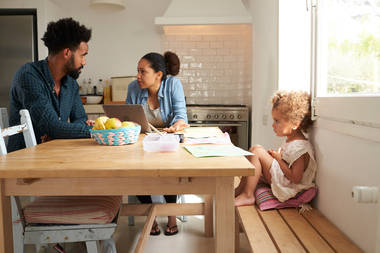 Some couples are fortunate to share a similar approach to childrearing. But many parents have different perspectives about how to raise kids — based on their own upbringings, beliefs and values, and expectations for their children.

The resulting conflict can have negative effects on children, including: children thinking they are the cause of their parents’ tension; fear and insecurity when they see their trusted adults at odds with one another; and an increase in acting-out behavior when children get mixed messages about expectations and limits.

Fortunately, there is a lot you can do to increase parenting harmony.

When parents insist that their way is “right” and put all their energy into convincing their partner of this notion, they tend to get increasingly polarized. In fact, partners may feel the need to compensate for what they perceive as the other’s inappropriate actions. The stricter parent may get more rigid to counter the other partner’s perceived leniency. The more lenient parent may become even more permissive to counter the other partner’s perceived severity.

If you find yourself in this dynamic, make a commitment to share your points of view about the parenting issues on which you tend to disagree. Listen openly to your partner. You don’t have to agree, but it is important that you understand where the other is coming from and acknowledge the validity of their perspective. We all want to be heard and understood. This makes for a stronger, harmonious partnership and provides your child with a powerful model for mutual respect and effective problem-solving in relationships.

One family I recently worked with was at loggerheads about how to get their 15-month-old, Lily, to sleep through the night. Mom was at her wit’s end with sleep-deprivation and wanted to go cold turkey — after lights-out there would be no responding to Lily. But Dad wanted to go in and rock her back to sleep.

When I asked each parent to share their thinking behind their different approaches, Mom said she felt any intervention or efforts to soothe Lily in the middle of the night would keep reinforcing the night-awakenings. Dad got very choked up at this point. He explained that, because his own father had left the family when he was two years old, he swore that his kids would never feel abandoned by him. Letting Lily cry, even a little, felt like his own abandonment by his dad.

Once they stopped trying to convince the other of the “rightness” of their position and truly listened to where their partner was coming from, these parents were able to come up with a plan that took into consideration both of their perspectives: They would peek in when Lily awakened at night to assure her they were still there and that all was well, but they wouldn’t hold or rock her back to sleep. This felt comfortable to Mom because she felt it would still give Lily the chance to learn to soothe herself. Dad could also live with this plan because Lily would get the assurance that Mom and Dad were there; when he took his emotions out of it, he was able to see that giving Lily a chance to learn to soothe herself was being a loving parent, not a neglectful one.

As you discuss your approaches, remember to make the focus what your child needs, not which one of you has the better approach and “wins.” Agree to think together about what your child’s behavior is telling you and what will help her cope. This should be the goal you both share and to which you are ultimately committed.

When your child engages in behavior that requires a response — and it’s a not life-or-death matter such as running into the street or climbing on the counter — take a parental time out. Taking time to pause before responding helps parents avoid being reactive and working at cross-purposes.

It looks and sounds something like this: In front of the child — in a very positive tone — one parent turns to the other and says: “Hmm, this is a problem. We’ve asked Henry to turn off the iPad but he is not cooperating. So, Henry, Daddy and I are going to take a minute to put our heads together to figure out how we can help you follow this rule.” This strategy is often enough to motivate a child to correct their behavior and make a better choice — especially when they see you working as a team! You can put a timer on for one or two minutes to come up with a plan you both feel comfortable implementing. This gives you and your partner a chance to collaborate on a united response.

3. Play to Your Mutual Strengths

Work together to identify each partner’s strengths or comfort-level when it comes to parenting challenges. The parent who is less anxious about their child’s daredevil nature might take the lead when they go to the playground — allowing the child to take age-appropriate risks. The parent who has more patience might deal with the temper tantrums. It is not that one parent is “better” than the other. Each of us has different trigger points, and you can use this awareness to become more effective coparents. It’s a strength, not a weakness, and it benefits everybody.

How can you minimize and resolve differences when you’re separated from your coparent? I address that in Part 2: Living Apart, Parenting Together.