On the Verge of Motherhood and Mental Illness: Prenatal Mental Health Service Utilization Among Women at Highest Risk

During pregnancy, low-income women are at high risk for depression and posttraumatic stress disorder (PTSD), but they are unlikely to receive mental health services. As a follow-up to Narayan et al. (2017), we provide a detailed picture of pregnant women’s mental health service (MHS) need versus utilization. Results suggested that the majority of women with very elevated depression and PTSD symptoms received MHSs during pregnancy. However, few women with lower-grade depression received MHSs, despite meeting prenatal depression criteria recommended by the American Academy of Pediatrics. Pregnant women of color were also especially unlikely to receive MHSs. Inefficient transportation and lack of child care were primary issues interfering with service utilization. Detailed recommendations for how to improve MHS access are discussed.

Pregnancy is often heralded as among the most joyous and exciting times in a woman’s life. Less often discussed, however, are the risks of pregnancy to mothers’ mental health. During pregnancy, women face immense upheaval and change in virtually every domain of their lives—including romantic and family relationships, personal identity, physical health, and finances—and they often confront tremendous uncertainty about all that is ahead (Slade, Cohen, Sadler, & Miller, 2009). This transition can be especially fraught for women with histories of childhood trauma, who often struggle with distressing reminders of their own difficult upbringings and concerns about their ability to parent differently than they were parented (Lieberman, Diaz, & Van Horn, 2009; Narayan et al., 2017). For some pregnant women, these stressors may contribute to the onset or exacerbation of mental health problems. 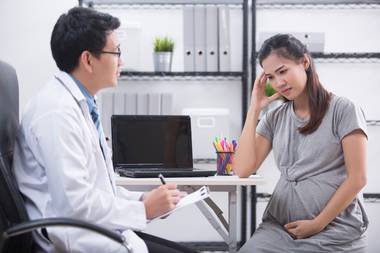 Pregnancy is often heralded as among the most joyous and exciting times in a woman’s life. Less often discussed, however, are the risks of pregnancy to mothers’ mental health.

Despite the clear and pressing mental health service (MHS) needs among expectant mothers, rates of MHS utilization during pregnancy are generally low (Cook et al., 2010; Kelly, Zatzick, & Anders, 2001). Women are unlikely to receive MHSs, even when they meet clinical thresholds for psychological disorders that are accurately detected by prenatal care providers (Kelly et al., 2001). Notably, pregnant women with mood or anxiety disorders are significantly less likely to receive MHSs than their non-pregnant peers with the same disorders (Vesga-López et al., 2008). Pregnant women are also less likely than postpartum women to receive services for similar mental health problems (Glasheen, Colpe, Hoffman, & Warren, 2015). This phenomenon is even more striking given that, during pregnancy, women may have the most contact with the health care system of any period in their lives. Yet, MHSs do not seem to adequately reach pregnant women, to the detriment of their own—and their babies’—health and well-being. What is responsible for the stark mismatch between elevated prenatal MHS need and low prenatal MHS utilization? How can MHS providers better serve pregnant women in need of care? This article pursues answers to these questions in a clinical research study of low-income, ethnically diverse pregnant women, with high rates of childhood and lifetime trauma, who were receiving prenatal care at an urban safety-net hospital. In a previous article using the same sample, we identified that women had an alarming level of unmet MHS need during pregnancy (Narayan et al., 2017). In this follow-up, we provide a detailed picture of those women’s prenatal MHS utilization, as reported during pregnancy and at 3–4 months postpartum. We investigate factors that may contribute to the gap between prenatal MHS need and utilization, including sociodemographic characteristics (e.g., poverty status, race/ethnicity) and severity of depression and PTSD symptoms. Finally, we provide recommendations for MHS providers and agencies, informed by participants’ insights into barriers to accessing services and their recommended solutions to improve services.