The Daddy Factor: The Crucial Impact of Fathers on Young Children's Development

This article presents the latest research on the important role fathers play in nurturing and shaping their children’s growth. 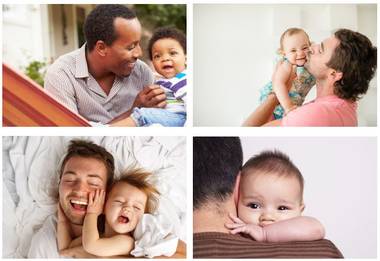 Dads matter—a lot. The relationship between father and child has a deep impact on children’s healthy development in all domains: language, thinking, physical, and social–emotional. Check out the fatherhood facts below that show the many ways dads positively impact children’s long-term development.

The impact starts early, during the prenatal period. Research shows that when a father is involved during pregnancy, he is more likely to be involved in parenting later on, such as reading with his child, performing caregiving tasks, and offering emotional support.

Babies who have fathers who are affectionate, respond quickly to their cries and other cues, and engage in loving play, are more securely attached to their fathers. Research shows that secure attachments have positive benefits that last into adulthood. Children who are securely attached do better academically; they are also more sociable and well-liked throughout early childhood as compared to children who do not have secure attachments.

Children whose fathers are involved in their daily care, such as feeding, bathing, and playing together, tend to be more confident; and, as they grow older, enjoy stronger social connections with peers.

Fathers who are actively involved in their babies’ lives—helping care for them, playing with them, and teaching them—tend to experience less conflict with their wives. This not only benefits children, it strengthens the marital relationship, and it also has long-term benefits for children.

Fathers who care for, nurture, and play with their babies raise children with higher IQs and with better language and cognitive skills. Involved fathers enhance their children’s communication skills because they tend to ask children more questions than mothers, which builds vocabulary and conversational skills.

New research shows that fathers may have an even greater impact on children’s language development than mothers. When fathers use more words with their children during play, children have more advanced language skills a year later. This is especially important because language skills are correlated with academic success.

The more time fathers spend in enriching, stimulating play with their child—such as playing pretend or sharing stories—the better the child’s math and reading scores are at 10 and 11 years old.