Home/Resources/My Toddler is Playing with his Penis. How Should I Handle This?

My Toddler is Playing with his Penis. How Should I Handle This?

It’s normal and natural for toddlers to explore their bodies. Here’s how to respond when you notice your toddler playing with his penis.

Q: OK, my son is now 3 years old and has started to play with his penis. He tells me it is “big,” and I am not sure how to respond to this. I have never seen this topic discussed. How do you explain privacy to a small boy and get him to keep his penis in his pants?

A: Have no fear—you are not alone. This is a very common phenomenon at this age and totally normal. Your son is exploring and learning about his body, and he is telling you what he thinks about it! This is a good thing. You want to make sure he has a positive body image, so how you deal this interaction is very important.

First off, if you find yourself speechless, simply repeating back to him a version of what he said (Yes, you’re a big boy and growing every day) buys you some time and validates his observation. Responding in a positive way builds your son’s sense of self and his language skills as you talk together about his observations.

It’s also important to put his growing body awareness in context by saying something along the lines of: You have a big, strong body and your penis is an important part of it. It’s how you go pee-pee and I know it also feels good to touch it. You can also point out his strong legs, his tall body, his wiggly toes, his tickly belly button, and all his other body parts. This builds his vocabulary and gives him a better understanding of his own body.

Also keep in mind that the more matter-of-factly (and less emotionally!) you respond to his penis comments, the less power it gives them, making it less likely that he will dwell on them. (My friend who forbade the word “butt” with her 4-year-old was dismayed to hear how quickly he was able to switch tactics and begin every sentence with ‘But…’ to get around the rule.) The key is to be comfortable with the language you are using and the information you are sharing. When you talk with him about this behavior, do it in a way that is gentle and non-judgmental. Young children are very sensitive and pick up on our tone of voice and facial expressions, not just our words. If he senses that you are angry or embarrassed by his actions, it can cause shame, which can have lasting, negative effects on his body image.

When you see your toddler playing with his penis, establish some common sense limits around this behavior and explain why. For example: Your penis is a private part of your body. That’s why we go to the potty in private—in the bathroom. So when you want to touch your penis, you need to do it in private, like in the bathroom or in your bedroom.

When you see him putting his hands in his pants, as subtly as possible, go to him and remind him that he either needs to stop or to go somewhere private. Some parents establish a special signal with their child that reminds him what the rule is so as not to embarrass him in front of others. And remember, as you help your son learn the new rules around touching his penis, he will need many reminders. 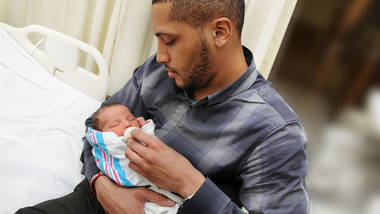