When Does the Fetus's Brain Begin to Work?

Generally speaking, the central nervous system (which is composed of the brain and the spinal cord) matures in a sequence from "tail" to head. 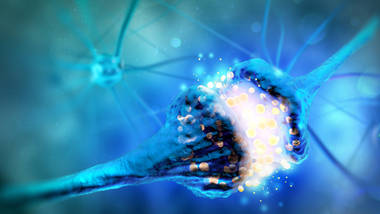 This image is a rendition of a synapse and shows two neuron cells sending electrical signals.

In just the fifth week after conception, the first synapses begin forming in a fetus’s spinal cord. By the sixth week, these early neural connections permit the first fetal movements–spontaneous arches and curls of the whole body–that researchers can detect through ultrasound imaging. Many other movements soon follow–of the limbs (around eight weeks) and fingers (ten weeks), as well as some surprisingly coordinated actions (hiccuping, stretching, yawning, sucking, swallowing, grasping, and thumb-sucking). By the end of the first trimester, a fetus’s movement repertoire is remarkably rich, even though most pregnant women can feel none of it. (Most women sense the first fetal movements around eighteen weeks of pregnancy.)

The second trimester marks the onset of other critical reflexes: continuous breathing movements (that is, rhythmic contractions of the diaphragm and chest muscles) and coordinated sucking and swallowing reflexes. These abilities are controlled by the brainstem, which sits above the spinal cord but below the higher, more recently-evolved cerebral cortex. The brainstem is responsible for many of our body’s most vital functions–heart rate, breathing, and blood pressure. It is largely mature by the end of the second trimester, which is when babies first become able to survive outside the womb.

Last of all to mature is the cerebral cortex, which is responsible for most of what we think of as mental life–conscious experience, voluntary actions, thinking, remembering, and feeling. It has only begun to function around the time gestation comes to an end. Premature babies show very basic electrical activity in the primary sensory regions of the cerebral cortex–those areas that perceive touch, vision, and hearing–as well as in primary motor regions of the cerebral cortex. In the last trimester, fetuses are capable of simple forms of learning, like habituating (decreasing their startle response) to a repeated auditory stimulus, such as a loud clap just outside the mother’s abdomen. Late-term fetuses also seem to learn about the sensory qualities of the womb, since several studies have shown that newborn babies respond to familiar odors (such as their own amniotic fluid) and sounds (such as a maternal heartbeat or their own mother’s voice). In spite of these rather sophisticated abilities, babies enter the world with a still-primitive cerebral cortex, and it is the gradual maturation of this complex part of the brain that explains much of their emotional and cognitive maturation in the first few years of life.