Babies from all 50 states and DC have a message to deliver to Congress:

Push babies to the top of your priority list!

Join the virtual rally on May 17

The Next Generation of Fathers

At no other time in history have dads been as passionate about and committed to rearing their young children, and they want to do even more. 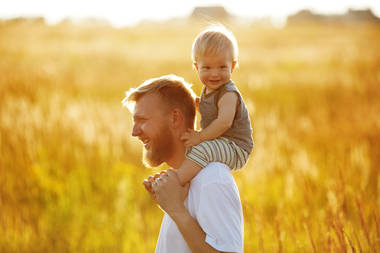 The new millennium has done more than usher in major technological advances; it seems to have brought with it a new take on fatherhood. At no other time in history have dads been as passionate about and committed to the rearing of their young children, and they want to do even more. From greater involvement in household duties to finding a better work-life balance, it’s clear that today’s dads see fatherhood as a pivotal milestone in their lives, and that they desire to be more deeply engaged with their children.

Ninety percent of millennial and Generation X dads say that parenting is their greatest joy.

For many dads, however, their commitment to fatherhood is not validated or supported by the outside world. While dads want to be more directly involved in parenting, they often feel shut out, treated like they are “parent number two,” seen as a helper, or worse, as a “babysitter.” Furthermore, a lack of adequate parental leave policies, low wages and demanding workplaces make it all the more difficult for them to have the time needed to fully engage, bond, and connect with their children.

Two new reports, Tuning In: Parents of Young Children Tell Us What They Think, Know and Need from ZERO TO THREE and the Bezos Family Foundation and the State of America’s Fathers from Promundo and MenCare have shed light on U.S. fatherhood. They point to changing attitudes and aspirations of fathers today and the important programs and policies that must be put in place to ensure dads - and all parents - have what they need to be successful.

Science tells us that the relationship between a father and child deeply impacts a child’s long-term development in many critical ways. Young children with involved fathers tend to be more patient and better able to handle stress and frustration once they’re in school. Dads who are present and involved from birth are more likely to stay involved throughout their child’s life. Children with involved fathers are less likely to experience depression, obesity, teen pregnancy and more.

Findings from the ZERO TO THREE/Bezos Family Foundation National Parent Survey show that dads stand at the ready. Ninety percent of millennial and Generation X dads say that parenting is their greatest joy, and 86 percent say they work hard at becoming a more effective parent. But dads are also clear that they need more support. Sixty percent want more information on how to be better parents, and 70 percent say if they knew more positive parenting strategies, they would use them.

The U.S. government is the only high-income nation in the world not to guarantee paid leave for its parents.

Defining and supporting the path for fathers’ engagement with their children is critical, and it has to begin at birth. Why? First, research shows that fathers who are present at the birth of their babies and are integrally involved in their early care are more likely to remain actively engaged throughout the child’s life, with major health and well-being benefits for children and fathers.

The research further shows that fathers - and mothers - don’t fully understand just how much is actually going on inside young babies’ brains starting on day one. A baby’s earliest connections with her parents and caregivers affects her cognitive, social and emotional health and well-being, and builds the foundation for future learning and success. Underestimating these earliest interactions points to a “missing year” of development. Consider that 63 percent of parents surveyed said that talking to a baby only starts to impact their growing language skills at three months or older. In reality, babies begin to benefit from hearing language and participating in back-and-forth “conversations” starting at birth. Additionally, 50 percent of parents believe that the quality of a parent’s care has long-term impacts on a child’s development from six months on, when, in fact, this also begins at birth.

Some of the programs and policies that can fill in the gaps to help parents reclaim this missing year are explored in a separate report from Promundo-US. The State of America’s Fathers shows that while the United States has come a long way in terms of gender equality in parenting, there is still a way to go. Most notably:

As a country, we’re missing the chance to support fathers and families during the most crucial time in a child’s development. These early years are a prime window of opportunity when a father’s active participation can set the stage for long-term benefits.

What Can Be Done

What can be done to ensure that fathers - and families - are given the support needed to give their children the best possible start in life? Both of these studies point to policy avenues that can change the course for families across a wide socio-economic spectrum, including:

These common sense policy investments are designed, and in many cases already proven, to support parents as they undertake one of the most daunting and delicate jobs of their lives: raising their children. All parents - regardless of gender or socio-economic standing - must be given the opportunity and support to positively influence how their children start out and develop through life. When that happens, we as a society benefit with a stronger, more prepared workforce, increased school success, and reduced incarceration and remedial education costs.

Originally published in the Huffington Post and written by Matthew Melmed and Gary Barker, President and CEO of Promundo. Click here for the full article.

Explore more from The Daddy Factor