Strolling Thunder Is Back – and Virtual!

Do you know a family who wants to turn their Members of Congress into champions for babies?

Then we need your help! Interest forms are due on March 5.

Multilanguage learners (MLLs) are children learning two (or more) languages at the same time, as well as those learning a second language while continuing to develop their first (or home) language. 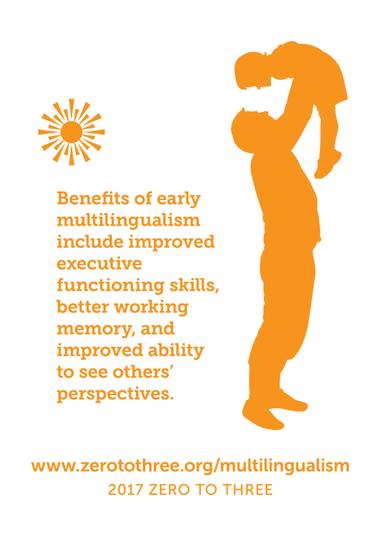 There are many developmental benefits to learning multiple languages at an early age, such as improved executive functioning skills—the ability to think flexibly, demonstrate self-control, focus attention, and tune out distractions (Bialystok & Martin, 2004; Zelazo, Carlson, & Kesek, 2008). Other research has found that bilingual children have better working memory than children who speak only one language. Working memory holds, processes, and updates information over short periods of time and is very important for problem solving and executive function (Morales, Calvo, & Bialystok, 2013).

The differences between multilingual and single-language speakers exist even at the neural level. Research has found that the patterns of brain response of bilingual infants to speech are different from those of infants whose families speak only one language. Bilingual children show continuous improvement in discriminating between two languages—for example, Spanish and English—from 9 months onward (Garcia-Sierra et al., 2011). Increased exposure to both languages seems to be related to an improved ability to discriminate between the two.

Babies are born with the ability to distinguish the unique sounds of any language in the world. This begins to diminish around 8 months of age, as the brain begins to make the connections necessary to recognize and learn the language they are exposed to most frequently, and they lose the ability to perceive sounds they have never heard.

Exposure to more than one language in the early years does NOT cause confusion for young children and in fact reach language milestones in a similar timeframe to those of children who learn only one language. However, it will typically take MLLs longer to develop proficiency in both languages because they are building and using two separate language systems.

While MLLs may develop smaller vocabularies in each language, if children’s vocabularies in both languages are combined, the total number of words an MLL knows is usually comparable to their single-language peers.

Children learning a second language or two languages simultaneously will often “code switch” or use both languages in the same sentence. It is not evidence of a problem in the language-learning process. Instead, this shows that children understand the grammatical rules of both languages. Children typically use this strategy to clarify their meaning in a grammatically correct manner. After all, if an MLL does not know the relevant word in the language in which she is speaking, the logical thing to do is to substitute the word in the other language to communicate the meaning she is intending to convey.

What is most important when raising MLLs is that children have roughly the same exposure to high-quality input in each language, each day—speaking and listening. In many cases, one language becomes dominant in a child’s life. For example, if a child is learning Spanish as well as English, English may become the child’s dominant language if that is what he hears all day at school and at child care. This is also why it’s so important for parents to use the home language as much as possible around their children, if their goal is for them to be bilingual.