Although children may learn some concepts from watching educational programming, they learn best from interactive, hands-on experiences with people they care about 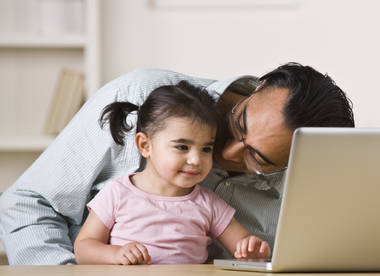 For parents and caregivers who choose to allow their young children to watch some TV, consider the following research and guidance on viewing.

Although children may learn some concepts from watching educational programming, they learn best from interactive, hands-on experiences—touching, feeling, shaking, stacking, problem solving—with people they care about. Research has found that some children’s shows (such as Arthur, Clifford, Dragon Tales, Dora the Explorer, and Blue’s Clues) have positive effects on children’s learning, but other shows (like Teletubbies or Barney & Friends) do not. In general, it’s best to choose age-appropriate programs in which:

What You Can Do:

Talk about the program. Ask 2- and 3-year-olds what they thought the show was about, which characters they liked and disliked, how it made them feel.

Answer children’s questions. Children are still figuring out new ideas and concepts. Sometimes they need your help to make sense of what they’re seeing on the screen.

Point out and name things they see on the screen.

Be active while you watch. Dance to the music, hop around like the bunnies on the show, and so forth.

Connect what children see on TV to children’s “real lives.” “Do you remember we watched a show about a mail carrier this morning? Here comes our mail carrier! Do you want to watch her deliver our mail?”

When the show is over, turn off the TV and act out the story. Use puppets to tell the story, or make up your own story to act out together.

Finally, do not use television shows or videos to put children to sleep. This makes it more difficult for them to learn to fall asleep on their own. Also, young children need the love, safety, and security that comes from naptime routines (story, back rub, song) shared with you.