Nurturing Your Child's Development from Birth to 2 Months

This handout is based on findings from a report From Neurons to Neighborhoods: The Science of Early Childhood Development* from the National Academy of Sciences that examined child and brain development in the early years. The information we offer is age-specific, summarizes key findings from the report, and suggests how you might be able to use these key findings to nurture your own child’s healthy development. 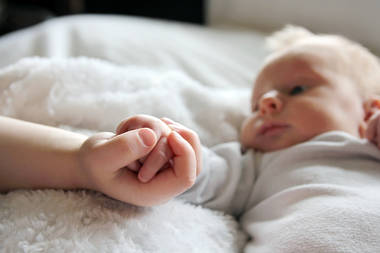 Findings from the From Neurons to Neighborhoods: The Science of Early Childhood Development include:

How Development Looks in Everyday Life

This example shows how all areas of Benjamin’s development are linked and how his parents help to encourage his development.

When 2-month-old Benjamin cries and cries each evening and kicks his arms and legs wildly, his parents try everything they can think of to comfort him. They rock, walk and swaddle him, massage his tummy in case he has gas and sing lullabies, all to calm him down. Sometimes it takes 20 minutes; sometimes it takes 2 hours.

Benjamin cries because he has come to expect that his parents will respond. When mom and dad don’t give up trying to comfort Benjamin no matter how frustrating it can be, they are nurturing his social and emotional development because it makes him feel important and he learns to trust that his parents will care for him. This gives him the confidence to trust others, which will help him form healthy relationships as he grows

Relationships are the foundation of a child’s healthy development.

In addition, being soothed by his parents in these early months will help him learn to soothe himself as he gets older, a very important skill throughout life. Using his voice and body to communicate is part of Benjamin’s early language and motor development. When his parents answer his cries, he learns that his efforts at communicating are successful, which encourages him to communicate more, first through gestures and sounds, and later through words.

The following chart describes many of the things your baby is learning between birth and 2 months and what you can do to support your child in all areas of her development. As you read, remember that children develop at their own pace and in their own way. Understanding who your child is, what her strengths are and where she needs more support, are essential for promoting her healthy development. If you have questions regarding your child’s development, ask your pediatrician.

*About "From Neurons to Neighborhoods"

The report From Neurons to Neighborhoods: The Science of Early Childhood Development was a 22-year effort by a group of 17 leading professionals with backgrounds in neuroscience, psychology, child development, economics, education, pediatrics, psychiatry and public policy. They reviewed what was known about the nature of early child development and the influence of early experiences on children’s health and well-being. The study was sponsored by a number of federal agencies and private foundations.