What the Future Holds

Our impact today on children, families, and communities

is creating positive, lasting change for a brighter tomorrow.

The implicit and explicit messages early childhood practitioners send about disability have important consequences for young children’s developing identities and sense of belonging. The authors discuss how practitioners can cultivate early learning communities in which the identities of all young children, with and without disabilities, are affirmed. Drawing on research and examples from practice, they explain how early educators can challenge and change deficit-based assumptions about disability and other forms of diversity by practicing inclusion. The article provides a framework for practicing inclusion and illustrates how such a process has the potential to positively affect the experiences of young children with and without disabilities, sending a much-needed message to all young children and families about civil rights, human diversity, and justice.

Leo, a 2.8-year-old child, experiences developmental delays. Leo was born just months after his family emigrated from Mexico to the United States. He has attended the same early childhood center since he was 12 weeks old. Leo moved from the infant room to the toddler room alongside his peers. He frequently chooses to participate in small- and large-group classroom activities such as dancing and exploring books with other children in the class. However, center staff have recently voiced concerns about Leo advancing with his peers to the preschool classroom in the fall. The center has a strict policy that children in preschool must be able to use the bathroom independently, and Leo has not shown interest in toilet training. The staff understand that Leo’s documented developmental delays may impact when he begins toilet training. Felicia, the center director, believes her preschool staff do not have the resources to support children in diapers. Up until this point, center staff have included Leo in all classroom activities and have welcomed his early intervention (EI) team as partners in supporting full inclusion for Leo. However, when Leo’s parents meet with Felicia, the EI team, and the preschool teachers, they seem to come to an impasse over the toilet training issue.

In EI, early childhood education (ECE), and early childhood special education (ECSE) settings, the messages practitioners send about disability, identity, and belonging matter. Young children with disabilities have historically been viewed through a deficit-based lens (Seligman & Darling, 2017), which has resulted in their exclusion from educational programs (Ferri & Bacon, 2011). Exclusion comes in many forms (e.g., physical, instructional, social, representational) and can have negative consequences for young children’s sense of self (Rutland & Killen, 2015), sense of belonging (Favazza, Ostrosky, Meyer, Yu, & Mouzourou, 2017; Nind, Flewitt, & Payler, 2010), and sense of fairness (Derman-Sparks & Edwards, 2011). What is more, hateful and exclusionary language and images related to disability and other historically marginalized identities have increased during and following the 2016 U.S. presidential election (Costello, 2016), further impacting young children’s sense of identity, belonging, and fairness. Therefore, there is an urgent need for early childhood practitioners to think critically about the practices they use to support inclusion.

While the need for inclusion in early childhood is urgent, practitioners’ knowledge and skills to support young children with disabilities may vary. Differences in training based on early education professional roles (i.e., EI, ECE, ECSE; Horm, Hyson, & Winton, 2013) and discrepancies in professional experiences based on early childhood settings (e.g., home-based services and programs, public center-based services and programs, private center-based services and programs; Fuligni, Howes, Huang, Hong, & Lara-Cinisomo, 2012), may result in an uneven knowledge base regarding how to include young children with disabilities in early learning settings (Sutherland & Teacher, 2004). Such variation means that EI/EC/ECSE practitioners enter the work of inclusion with a range of experiences and vantage points, requiring professional support (e.g., resources, professional development) in different forms, frequencies, and levels of depth.

Despite professional variation in knowledge and skills, we argue here that all early childhood practitioners have the responsibility to cultivate early learning communities in which the identities of all young children are affirmed (Ferri & Bacon, 2011). There-fore, practitioners must be supported to learn about inclusion, challenge and change deficit-based assumptions about disability and other forms of diversity, engage in processes of reflection, and take actions that allow all young children to fully participate in their communities. Practicing inclusion is not easy. Despite more than 40 years of research, advocacy, and policy work documenting the important benefits of inclusion for all children, too many young children with disabilities continue to be excluded from meaningful learning opportunities with their same-age peers (U.S. Department of Health and Human Services & U.S. Department of Education, 2015). For this reason, the Division for Early Childhood Priority Issues Agenda (2018) included “(Actually Achieving) High Quality Inclusion” as a priority for all professionals that support young children and their families (p. 2). In this article, we discuss this professional priority in depth by offering definitions, perspectives, strategies, and resources for practicing inclusion and doing justice in early childhood settings. 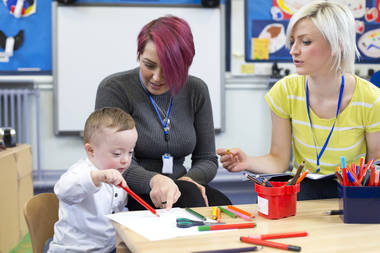 The need for inclusion in early childhood is urgent.