Abstract
Early Learning Neighborhood Collaborative (ELNC) began as a year-long initiative to support early learning for very young children and families. The program has grown into a self-sustaining, nonprofit, place-based organization committed to improving the lives of children and families in the underresourced neighborhoods of Grand Rapids, MI. Together with local partners, ELNC is implementing an intentional birth to 5 service system that provides high-quality early care and education within a multigenerational framework. Now in its 10th year of operation, ELNC is made up of six community organizations and annually serves more than 400 families and their infants, toddlers, and preschoolers.

The years between 2010 and 2012 were economically bleak for many families in the United States. In fact, the nation’s poverty rate rose to a whopping 15.1%, the highest in 17 years (United States Census Bureau, 2011). In Grand Rapids, Michigan, at that time, the poverty rate had grown faster than any other metropolitan area in the country (Kneebone & Berube, 2014) and young children were entering kindergarten reporting no previous preschool or early childhood experiences at an alarming rate of 71.1% (Michigan School Data, 2019). As if these facts were not enough to cause serious alarm, the high school graduation rate hovered below 50% from 2011–2013 (Public School Review, 2020). Census data from 2010 (United States Census Bureau, 2010) revealed that 21.2 % of families in the city of Grand Rapids were living below the poverty line, and that figure increased to 24.9% for families with children under 5 years old. In fact, 55% of infants were born to mothers who did not have a high school diploma, and 20% of infants were born to teen mothers. Grand Rapids families, like many families around the country, were in a state of crisis.

Physically, the neighborhoods in which these families resided were barren and desolate, with boarded-up houses and businesses. Parks and open area play-spaces were littered with debris, broken glass, and deteriorating playground equipment. Job prospects and educational advancement opportunities for parents were few and far between, and access to high quality,full-day early learning centers and preschools in the neighborhood for young children were nonexistent.

A local Grand Rapids stakeholder and college professor took notice of this crisis and decided to take action. Dr. Nkechy Ezeh was commissioned by the W.K. Kellogg Foundation to lead a year-long project which included planning and implementing an Intentional Preschool Service System to expand and sustain high-quality preschool slots in these same underserved and underresourced Grand Rapids neighborhoods. Early Learning Neighborhood Collaborative (ELNC) was established in response to this crisis. ELNC began as a grassroots initiative involving neighborhood-based providers, local community-based organizations, and faith-based organizations interested in the early education of young children. 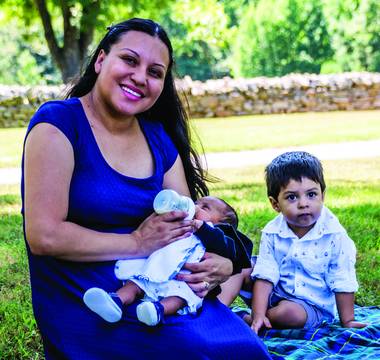