Dr. Jones Taylor to join cohort of visionaries creating powerful, exciting ideas that shape and influence the most pressing issues of our time. 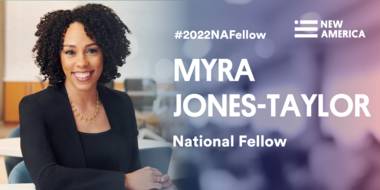 New America has selected ZERO TO THREE Chief Policy Officer Dr. Myra Jones-Taylor to serve as a prestigious National Fellow. The fellowship supports visionary researchers who create powerful, exciting ideas that shape and influence conversations about the most pressing issues of our time.

“I am honored to join this class of fellows and very much appreciate New America for choosing me for the opportunity,” shared Dr. Jones-Taylor. “In my book writing project, I will attempt to reframe childcare as a public good, to put it on equal footing with K-12 education and infrastructure, like roads and airports, and protect it from the ravages of the market and future crises.”

Dr. Jones-Taylor earned her doctorate in American studies and anthropology from Yale University. She has the honor of being both an Ascend Fellow and a Pahara Fellow at the Aspen Institute. In 2020, she was named to the inaugural Care 100, honoring the 100 most influential people working to re-imagine and re-humanize the care system.

She previously served as Connecticut’s founding Commissioner of Early Childhood, leading the cabinet-level state agency responsible for early care and education, home visiting, early intervention, and child care licensing in the state, serving all children from birth through age five.

Since 1999, the New America Fellows Program has supported 250 National Fellows as they pursued ambitious projects resulting in the publication of 136 books, 12 feature-length films, and more than 15 long-form articles.