Babies from all 50 states and DC have a message to deliver to Congress:

Push babies to the top of your priority list!

Join the virtual rally on May 17

In an effort to simplify the multi-layered and sometimes confusing matrix of state and federal services for children, North Carolina has created an integrated data system to collect education, health, and social service data on children from birth to age 5. The goal is that integrated early childhood data will lead to better insight, better answers, better decisions and ultimately better outcomes for children and families. 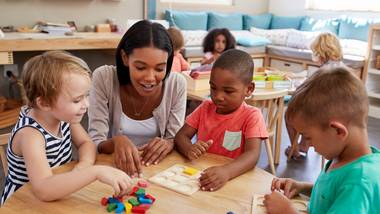 An integrated data system is a single place for data for children and families served by multiple state and federal agencies. This provides North Carolina an accurate picture of services families receive, family characteristics, and outcomes for the child and family. The integrated data system, now called the NC Early Childhood Integrated Data System (NC ECIDS), simplifies navigating multiple layers of services and agencies a recipient has used by collecting, maintaining, and storing information from early childhood programs across multiple agencies. This includes information from early childhood programs such as Help Me Grow, Head Start, and home visiting, as well as state registries for birth certificates and immunizations.

The project was originally spearheaded by North Carolina’s Early Childhood Data System Work Group as part of a federally funded grant from the Office of Special Education Programs in the U.S. Department of Education to the Frank Porter Graham (FPG) Child Development Institute at the University of North Carolina at Chapel Hill. Race to the Top Early Learning Challenge funds were also used to support creation of the data system.

The need for the NC ECIDS became clear in 2008 when the Early Childhood Data System Work Group compiled information about the data fields, software, data collection processes, and federal requirements impacting the existing agency data systems. Six statewide early care and education programs were surveyed, including Part C early intervention, preschool special education, Head Start, child care subsidy and licensing, pre-k, and Smart Start. Results of the analysis showed that few data fields were common to all programs and there was a wide variation in how the data were collected, aggregated, and managed.

In response to these findings, the Early Childhood Data System Work Group developed recommendations, including a universal approach to assigning child identification numbers, adoption of some common data fields, and information-sharing among data managers in various agencies. Using an existing software program, FGP staff conducted a pilot study with over 50,000 child records from three of the state early childhood programs. They found that 459 of the children participated in all three programs, and 5,277 were served by two of the three programs.

As a part of NC ECIDS’ promise, they will: integrate data in order to answer key program and policy questions; provide counts of children who receive multiple early childhood services; produce aggregate reports for common program and policy questions; provide data elements for approved research requests; and include only children who are receiving services from participating programs (not every child in North Carolina).

Currently the data is available for the public as well as for researchers. Users can create custom versions of standard reports as well as make data requests for approved research.

Explore more from Accountability and Evaluation