Home/Resources/Are there any differences in the brain development of boys’ and girls’?

Are there any differences in the brain development of boys’ and girls’?

Yes, but they are subtle, and a product of both nature and nurture. Learn more about brain development below.

Neuroscientists have known for many years that the brains of men and women are not identical. Men’s brains tend to be more lateralized—that is, the two hemispheres operate more independently during specific mental tasks like speaking or navigating around one’s environment. For the same kinds of tasks, females tend to use both their cerebral hemispheres more equally. Another difference is size: males of all ages tend to have slightly larger brains, on average, than females, even after correcting for differences in body size.

Electrical measurements reveal differences in boys’ and girls’ brain function from the moment of birth. By three months of age, boys’ and girls’ brains respond differently to the sound of human speech. Because they appear so early in life, such differences are presumably a product of sex-related genes or hormones. We do know that testosterone levels rise in male fetuses as early as seven weeks of gestation, and that testosterone affects the growth and survival of neurons in many parts of the brain. Female sex hormones may also play a role in shaping brain development, but their function is currently not well understood.

Sex differences in the brain are reflected in the somewhat different developmental timetables of girls and boys. By most measures of sensory and cognitive development, girls are slightly more advanced: vision, hearing, memory, smell, and touch are all more acute in female than male infants. Girl babies also tend to be somewhat more socially attuned—responding more readily to human voices or faces, or crying more vigorously in response to another infant’s cry—and they generally lead boys in the emergence of fine motor and language skills. 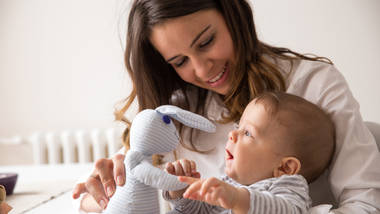 Boys eventually catch up in many of these areas. By age three, they tend to out-perform girls in one cognitive area: visual-spatial integration, which is involved in navigation, assembling jigsaw puzzles, and certain types of hand-eye coordination. Males of all ages tend to perform better than females on tasks like mental rotation (imagining how a particular object would look if it were turned ninety degrees) while females of all ages tend to perform better than males at certain verbal tasks and at identifying emotional expression in another person’s face. (It is important to emphasize that these findings describe only the average differences between boys and girls. In fact, the range of abilities within either gender is much greater than the difference between the “average girl” and the “average boy.” In other words, there are plenty of boys with excellent verbal skills, and girls with excellent visual-spatial ability. While it can be helpful for parents and teachers to understand the different tendencies of the two sexes, we should not expect all children to conform to these norms.)

Genes and hormones set the ball rolling, but they do not fully account for sex differences in brain development. Experience also plays a fundamental role. Consider, for example, the “typical” boy, with his more advanced spatial skills; he may well prefer activities like climbing or pushing trucks around—all of which further hone his visual-spatial skills. The “typical” girl, by contrast, may gravitate more toward games with dolls and siblings, which further reinforce her verbal and social skills. It is not hard to see how initial strengths are magnified—thanks to the remarkable plasticity of young children’s brains—into significant differences, even before boys and girls begin preschool.

But this remarkable plasticity also provides parents and other caregivers with a wonderful opportunity to compensate for the different tendencies of boys and girls. For example, it is known that greater verbal interaction can improve young children’s language skills. So the “typical boy” may especially benefit from a caregiver who engages him in lots of conversation and word play. On the other hand, the “typical girl” may benefit more from a caregiver who engages her in a jigsaw puzzle or building a block tower—activities that encourage her visual-spatial integration. The point is not to discourage children from sex-typical play (since pushing trucks or playing with dolls are great activities for any young child), but to supplement those activities with experiences that encourage the development of many competences.