We asked moms and dads who are raising this generation of children what they think and how they feel. Explore the key insights from our National Parent Survey.

Studies about the lasting importance of a child’s experiences in the first three years of life, once relegated to scientific or academic journals, are now fueling a broad national conversation about what this growing body of research means for families and communities across the country.

But is this information about early, rapid brain growth—and how it is influenced by the quality of caregiving young children receive—reaching the people who need it most? If we care about babies and toddlers, we need to care about, listen to and meet the needs of their parents. Any effort to nurture and support young children, and to set them up for success in the long term, will be strengthened by helping their parents put this valuable brain science into action. 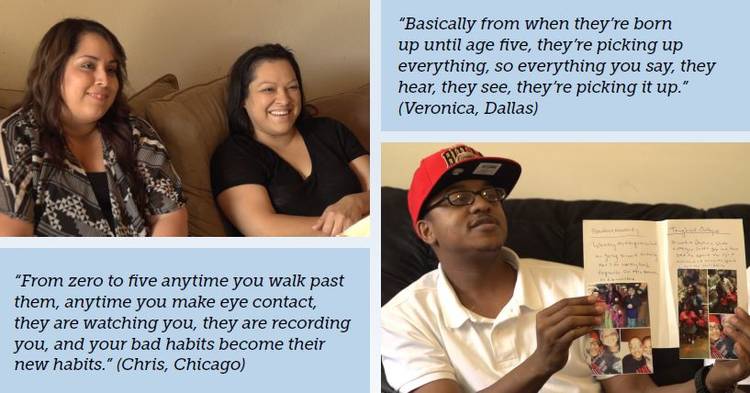 That’s why ZERO TO THREE, with the support and collaboration of the Bezos Family Foundation, undertook a comprehensive research effort to go directly to parents of young children—largely Millennials and Gen-X mothers and fathers—to gain a clear and in-depth understanding about the challenges they face, the help they seek and how satisfied they are with the support and information they receive.

We conducted 10 in-depth discussion groups in the homes of parents from a wide range of backgrounds (moms and dads; single and married, Caucasian, African-American and Hispanic) in Chicago and Dallas in the summer and fall of 2015. The insights from these groups informed the development of a 50-question internet survey. Available in English and Spanish, the survey was conducted in October 2015, with a nationally representative sample of 2,200 parents of children birth to 5 years.

Explore the key findings from our research.

There Is More That Unites Than Divides Parents

When it comes to attitudes, aspirations and parenting challenges, there is more that unites than divides parents.

Parents of various backgrounds and circumstances show strikingly similar beliefs, at very similar levels of intensity, about the joys and challenges that parenting brings. They share a strong sense that they are good parents, as well as a universal desire to improve their parenting skills.

Parents Universally Believe That Parenting Can Be Learned

Across demographic segments, parents want to improve their parenting and seek help in doing so:

Of note is that while they understand the importance of the first 5 years of a child’s life, 58% of parents find this notion both motivating and terrifying to varying degrees. 1 in 4 parents feel equally terrified and motivated.

The importance of the early years is both motivating and terrifying to parents. 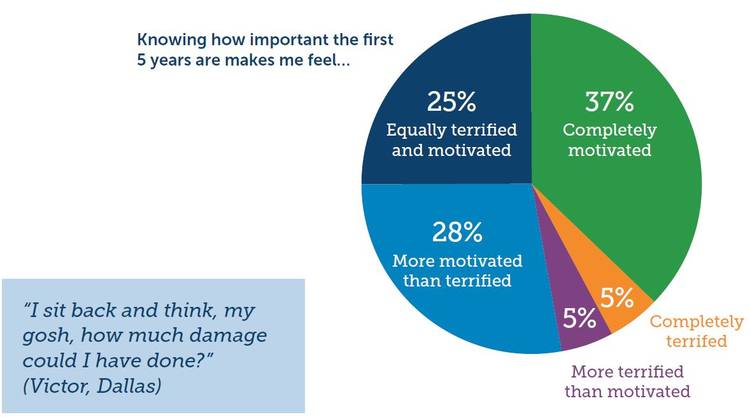 Dads Are More Than Babysitters

They love being involved fathers, and want—and deserve—more credit. The vast majority of dads, across all demographic segments, are passionate about the positive role that fatherhood plays in their lives. 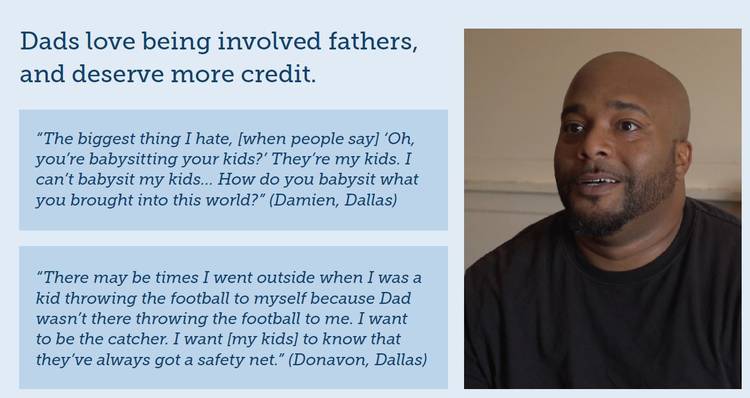 Still, many dads report feeling frustrated and shut out:

There Is a “Missing” First Year

While parents have a general understanding that what happens in a child’s early years can last a lifetime, many don’t realize at what age babies and toddlers can begin to feel complex emotions. Parents also don’t realize how deeply they can be affected by the way parents interact with them in the first months of life. A notable portion of parents miss the mark by months, or even years.

Parents overall consistently underestimate just how early children can be affected by some critical experiences:

About half of parents believe that children are capable of self-control and other developmental milestones much earlier than they actually are.

Parents were asked to choose at what age on average (birth, 3 months, 6 months, 1 year up to 8 years) a child is capable of the following skills: Parents are equally likely to view discipline as a way to nurture their children as it is a way to stop bad behavior. While parents use a range of discipline strategies, many are not seen as the “most effective” approach.

The chart below shows the percentage of parents who say they use these discipline strategies frequently (once a day or more or a few times a week) and whether they think each of these methods is among the most effective. Parents say that that harsh discipline strategies, like spanking and yelling, are not the most effective, including the parents who use these methods frequently.

Parents Are Drawing a New Roadmap

While moms and dads say that the way they were raised is a primary influence on their own parenting, many say they are more positive and present and use fewer harsher discipline tactics that their own parents used with them.

Parents were asked to indicate whether they use each of the following approaches more, less or as much as their own parents when they were children: 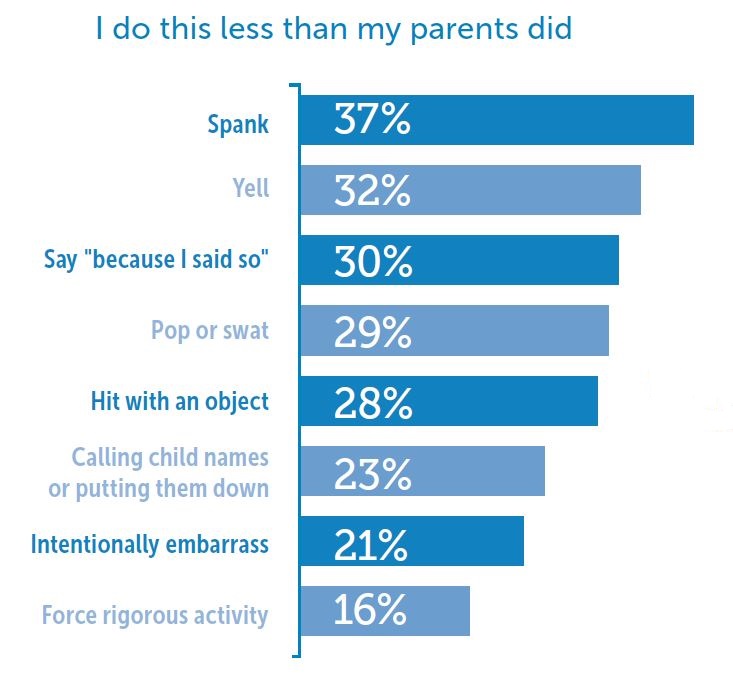 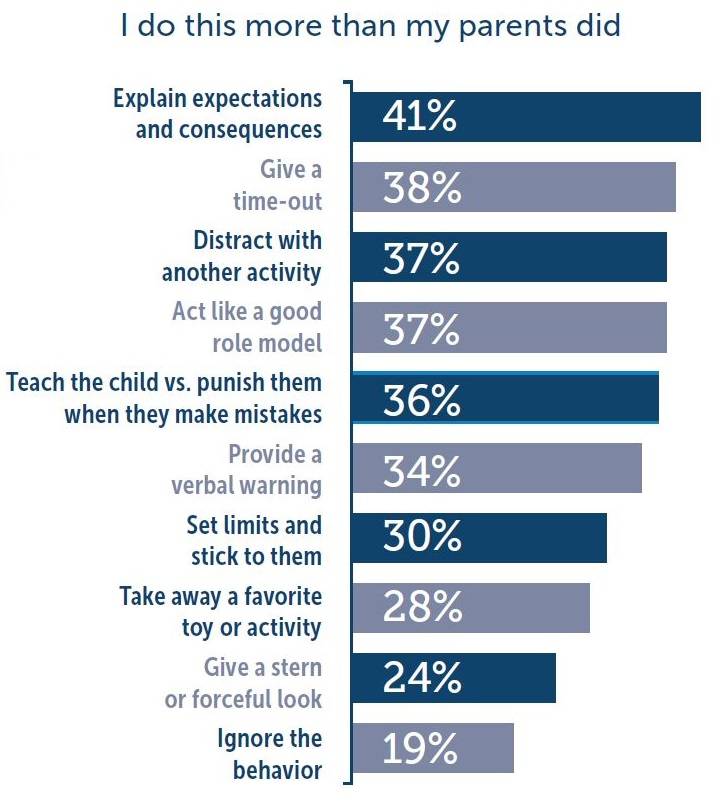 There Is a Trust Gap

Parents want advice, but are overwhelmed by sources of help and underwhelmed by the quality of what they’re getting. Just because parents turn to a particular resource for guidance doesn’t mean it’s useful. For example, 84% turn to articles specifically aimed at helping parents, but only 49% find them helpful.

How often do you get parenting advice, information or guidance from each of the following and how helpful do you find these resources? 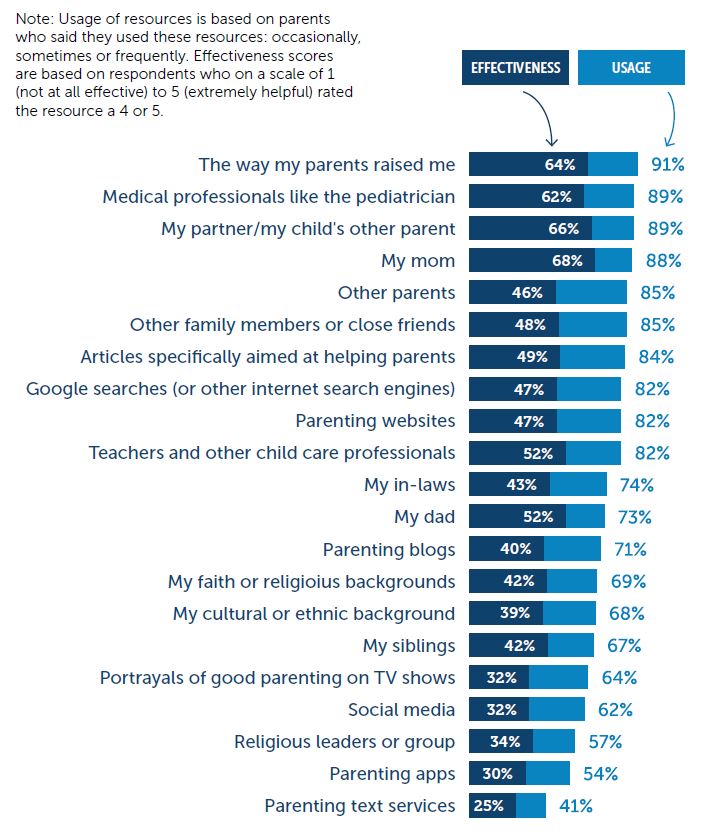 Parents report relying on guidance and information about parenting from many sources—friends, family, doctors, teachers, religious leaders and a range of digital media outlets. However, they are overwhelmed by the volume of information and conflicting advice and are underwhelmed by the usefulness of the information.

Almost All Parents Feel Judged, Almost All the Time

Moms are more likely to feel judged than dads are, with one important exception: Dads feel more judged by their co-parents than moms do.

Parents report that they feel most judged by strangers in the community, with 48% of moms and 24% of dads feeling this way. 33% of moms, versus 19% of dads, feel judged by other parents.

The only time dads say they feel more judged for their parenting than moms do is when judgment comes from their child’s other parent (22% of dads versus 17% of moms).

When parents are overwhelmed or stressed, they lack adequate support, and some get no support at all:

Thinking about the times when you feel overwhelmed or stressed as a parent, do you get the support you need? 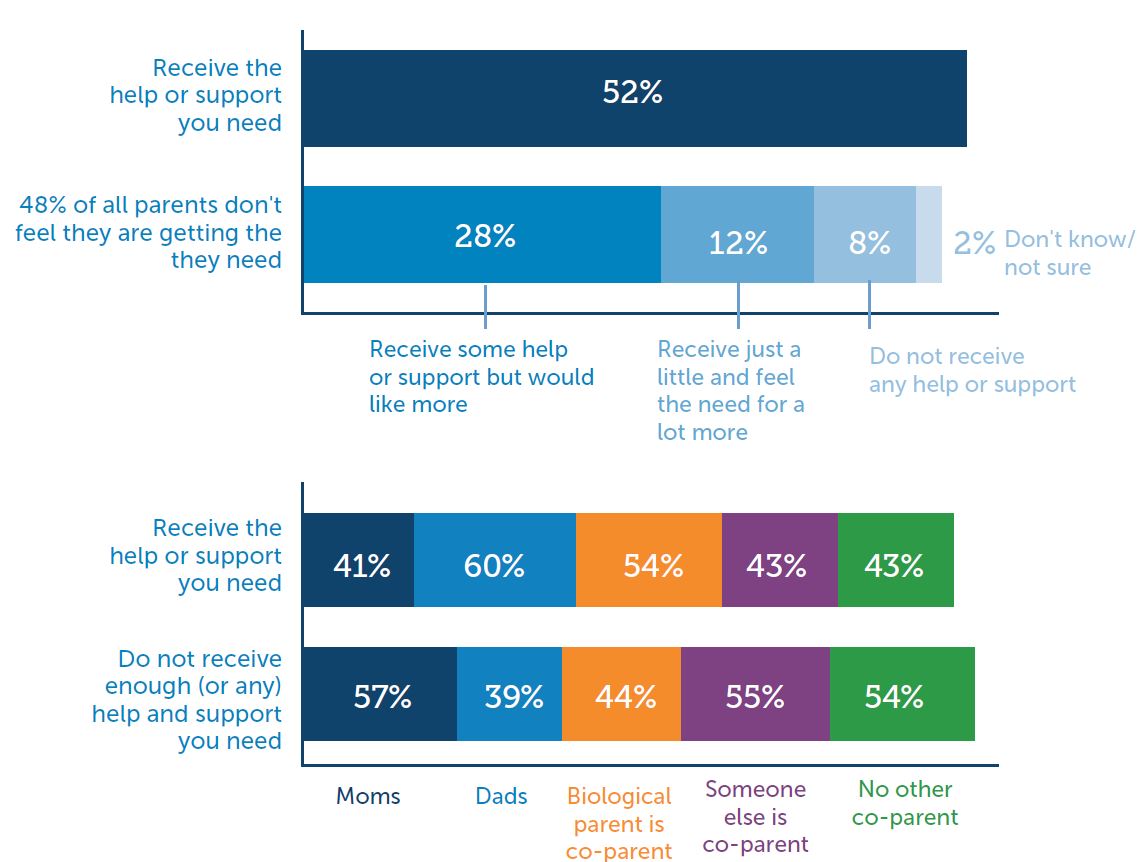 The fact that fully half of parents say they aren’t getting the support they need presents a risk and an opportunity. We know from decades of research that, especially during times of stress, the more parents feel supported, the better able they are to provide a caring and healthy environment for their children. Those children then fare better on a variety of academic and social well-being measures in the long-term.

Parents Want More from the Media

They welcome information about parenting in all kinds of content from expert-informed websites to portrayals of typical parenting challenges and helpful solutions incorporated more broadly into popular media. 54% of parents want information from a website or blog from child development experts. Parents want this information delivered directly to them, via email (39%), in apps (34%) or text message (18%).

The majority of parents want TV shows to provide guidance:

Download the PDF for a list of citations and a description of the methodology. View the overview and full report.