Got Grandparents? Here’s What They Say About Helping Raise the Kids

Grandparents are the unsung heroes of early child care in the United States. One of four children under 5 years old in the US is cared for by a grandparent while parents work or go to school. With the support of the David and Lucile Packard Foundation and the Bezos Family Foundation, the parenting resource team at ZERO TO THREE has spent the last 3 years looking closely at how this arrangement works.

We began with a literature review. That’s when we learned that there are as many children younger than 5 years old being looked after by grandparents as there are enrolled in formal child care programs—nearly 5 million infants, toddlers, and preschoolers according to the U.S. Census. Studies suggest that caring for grandchildren part-time doesn’t have a negative impact on grandparents’ health, although the impact of providing care (e.g.,, stress or marital discord) tends to change as time spent with grandkids approaches full-time, custodial care. Experts described the relationship between grandparent and grandchild as transformative for both generations.

This discovery led us to the grandparents themselves. To hear from them directly, we conducted three focus groups in Los Angeles during Spring 2017. “They are my compass; they’re my life,” said one grandmother. “They have infused my life with life. It’s the truth… they have given me a reason to live.” One grandfather said he had moved across the country to assist his daughter who was raising his grandson alone.

Grandparents in the focus groups passed around grandkids’ cellphone photos and eagerly swapped stories, not all of which were positive. One grandmother told us, “My son, I call him Dr. Spock. He knows everything… I have no input there.” Others struggled not to intervene as their adult children learn to parent. “It’s hard to watch her disciplining skills versus mine. I just tell her she should pick her battles with the 3-year-old because he is very strong-willed.”

Some grandparents depended on their adult children for information on child-rearing practices that have changed in the last few decades, such as putting babies to sleep on their backs. Some grandparents still resorted to spanking. Others turned to the Internet for the latest advice on car seats or community events for little ones.

Next, we created three short films profiling individual families and the diverse ways in which they approach sharing the care across generations. While the circumstances are different from family to family, the challenges they face, the gratitude they feel, and the support they find helpful are remarkably similar.

We partnered with the National Council on Aging to create a Grandparent Movie Night kit, with instructions for running a community event in which programs screen the films and play games (developed by us) that introduce caregiving practices that have changed over the last 20 years. The kit is complete with promotional materials, a schedule of activities, and even a template for a grandparent-themed popcorn box. We’ve planned a webinar for later this month to provide additional context for Council members—with the potential to reach to hundreds of senior centers across the country.

This year, we developed and administered a national survey of 1,000 grandparents nationwide who care for grandchildren 5 years old and under for at least 15 hours a week. Nearly one third of the participants lived in multigenerational households. One quarter of participants were working full-time, while another one quarter were retired. We oversampled African-American and Hispanic families to ensure a large enough sample to look at these family groups separately. (Executive summary here.)

Even I, who moved 500 miles to be closer to my sister’s grandchildren, was surprised at the level of affection and commitment expressed by the grandparents in our survey. Although it wasn’t surprising that 98% said they love their grandchildren, nearly as many (94%) said they love their role as caregivers. Nearly 80% received no financial compensations for their caregiving. Nevertheless, they reported feeling rewarded by spending time with their grandchildren, being able to shape their early experiences, and being able to ensure they get the best care.

Nearly 1 in 2 grandparents surveyed experienced some level of tension or disagreement with their grandchild’s parents over some aspect of child-rearing. Common culprits were handling tantrums, navigating mealtimes, and limiting screen time. In multigenerational households, the percentage of grandparents experiencing tension jumped to 57%. We think it’s perfectly normal for coparents of every combination to have different child-rearing approaches, and we’ve created tools for starting and continuing a conversation about how best to collaborate.

College-educated grandparents are most likely to disagree with a child’s parent about some aspect of child-rearing, and least likely to express those opinions aloud. 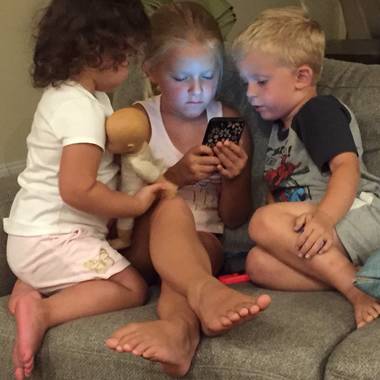 (Yes, I see you, darling great-nieces and -nephew enjoying your screens. And I’m not offering up any research. You have parents who are running the show!)

We’re currently seeking funding to expand on our Movie Night offering, creating a series of multigenerational events to celebrate grandparents, foster communication between generations, and get both parents and grandparents up to speed on recent parenting research. We’ll let you know when we have more info.

In the meantime, our hats are off to the grandparents who fill a huge gap in our child care system. We’ve learned that the rewards of this role are many: the joy of observing the tiny swagger of a grandson who reminds you of your own son as a toddler and the take-charge attitude of a granddaughter who’s a lot like her mom. The chance to spend time with the youngest members of your family. The chance to influence who they will become. We appreciate the opportunity to support communities in this effort and invite you to explore the resources we’ve designed with that in mind.