Grandparenting: On Your Lap, In Your Heart

Grandparents—whether living near or far—enjoy a special relationship with their grandchildren. These resources were developed to support grandparents in whatever role they play in the life of their young grandchildren. 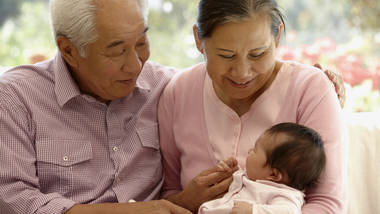 Grandparents are the ones who are often willing to read the same story over and over, play a silly game, or say “who’s there” to a knock-knock joke more times than they can count.

These resources, funded by MetLife Foundation, were developed to support grandparents in whatever role they play in the life of their young grandchildren.

While many grandparents provide occasional care for their little ones, more and more grandparents are serving as the primary caregiver for their young grandchildren. According to AARP, more than 5.8 million children across the United States are living in their grandparents’ homes—and more than 2.5 million grandparents have taken on the responsibility for raising these children.

ZERO TO THREE’s grandparenting resources include information on supporting healthy child development as well as tools for addressing some of the more common challenging situations that come up when raising young children. Take a look.

Sharing the Care With Your Adult Child

Building a Strong Relationship With Your Grandchild